It has to be done, but I am not happy about it.

Not happy at all.

In fact, I am quite saddened. 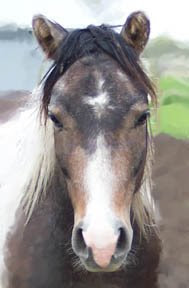 I have to sell my horse.... Thunder the Wonder Pony... who in all reality, should have died in 2004 when he was gravely ill after eating toxic plants that damaged his liver and killed off a load of his skin.

But it is simple economics that is forcing this issue... economics and a back injury a couple of years ago that has made riding most difficult for me. Something that I loved to do now causes me pain. And I cannot justify a horse as a pet... especially when he costs me about $350 a month. That is just routine boarding costs, with hoof trims and deworming thrown in and spread over a year to average out at that figure. That does not include any vet bills for emergencies.

His will to live, my nursing skills, and a lot of work went in to keeping him alive. He lived in the barn for three straight months, only taken out in the evening to graze and walk around a bit. His liver recovered from the damage, and his skin regrew, although in many places, it is naked, lumpy scar tissue and he gets a lot of sideways looks from people who think he has something horribly contagious. He looks like a burn victim, which in a way, is what he is.... only he was burned from the inside out.

He ate alsike clover, which is toxic to horses and many other grazing animals. It causes liver damage and photosensitization, affecting the white areas on the animal. Thunder is a pinto... more than 50% of his body is white, in a pattern known as Tobiano. The reason the white areas are affected is because the skin under white hair has no pigment... it is pure pink; under hair of any colour, the horse's skin is dark grey. So the stuff in plants that does the photosynthesis thing is what the liver would normally filter out; and since it is not filtered out, it is deposited in skin cells, especially the ones with no pigment. There, it reacts to sunlight, burning the horse from the inside out.

Basically, Thunder got cooked. He was so severely burned that his skin died off in huge sheets. He couldn't be exposed to sunlight at all for several months. I spent tons of time managing his wounds, which were very extensive. I spent hundreds of dollars on antibiotic cream to prevent infection, and as the skin dies off, I had to cut off the dead skin with scissors to allow the wounds underneath to heal properly.

It was a horrendous experience for both him and me. But if I had not been a nurse.... if Thunder had been owned by anyone else, he would have been euthanized. Or he would have died of horrible infections. Somehow, his patient tolerance of my ministerings told me he was willing to keep going, despite weeks of twice daily injections of steroids and antibiotics, being cooped up in the barn, having his legs wrapped with disposable diapers to cover the oozing wounds, leg wraps and gooped with ointment everywhere.

Because you probably won't find a sweeter horse anywhere. He has such a pleasant personality... and is quite the character! He loves attention just as much as he loves to be ridden and to work. He's bright, quick to learn new things and has tons of athletic ability. I can only imagine what he would be like if he didn't have some limitations from the scars on his legs and neck.

He has difficulty crossing his left foreleg in front of his right. The scars run up the inside of that leg, plus the left side of his neck and onto his shoulder is one large mass of scar tissue. It is tighter than normal skin, because scar tissue is not as elastic.... so he can't stretch that side quite as far as the right side, which only has a much smaller scar higher up on his neck, and the right leg is only scarred at the back of the knee. 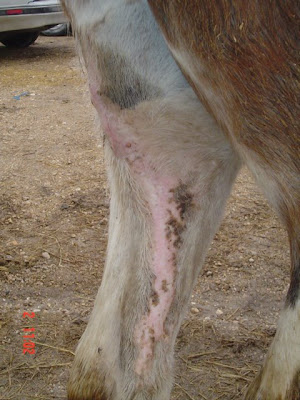 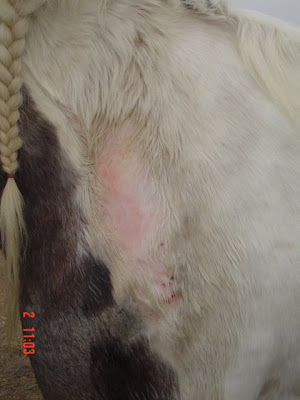 He is well trained, patient, silly, not spooky and a well mannered horse. Plus he's really cute, despite all the scars. But I have to face facts. That $350 I could use for paying down debt, for eventually doing renos on my house, or travelling to far off places. So I have to be realistic and bite the bullet.

However, he has to go to the right person. Although he is the kind of horse that most anyone can ride, as he is well trained, patient and not spooky, he does require some special care because of all the naked spots on his skin.

He has to wear blankets in the winter. He needs a rainsheet in the spring and fall when it is cool and wet. He gets cold easily as his body doesn't grow a normal winter coat. He must wear a full body fly sheet in the summer to protect against insects and sunburn. He needs sunscreen applied daily in the summer and moisturizer year round, as his scars get dry and flaky, which means they will crack and bleed. That can only hurt, so I try to keep him well lubed and supple.

But he is the kind of horse who will break out of his stall when he is bored and go visiting up and down the aisle in the barn, tossing everyone else's halters on the floor. He doesn't get into the pure alfalfa hay sitting out at the end of the barn, or try and run all over the place. He will even eventually go back into his own stall when he is hungry and thirsty. But he is a social butterfly. 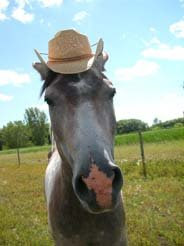 He has let me put a straw hat on his head, when none of the other horses would let me near them with the hat. And that was out in a 23 acre pasture where it would be so simple to just walk away.

He is also the model for the Giant Underpants, soon to be appearing on MJ's blog. And he was cool as a cucumber for that photo shoot, patiently standing while I lifted each of his hind feet to put them on, pull them up, cut a hole for his tail and then to stand there while I took even more photos.

He has squeezed out the paddock fence when there was polymer cable but no electric wire, just to eat some grass. And to meet me at the gate when I got home, asking me to put him back in so he could have a drink of water. On a farm, with a gate at the end of the driveway but absolutely no perimeter fencing, so he could have travelled to Timbuktu, if he had so chosen.

This will probably be a lengthy process.... finding the right person for him. I won't let him go to just anyone. I have to be sure he will be cared for properly by someone who understands his limitations and requirements. Someone who will ride him and teach him things, spend time with him and enjoy his antics. Someone who will love him as much as I do.

Because as I sit here and type this, I have tears streaming down my face. I have has this special guy in my life since he was a pipsqueak of a yearling, when I thought he would never grow to be big enough for me to ride. He was a little thing then. But he is an excellent size now, with feet and legs that are sturdy and good sized. 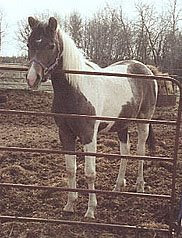 I spent a lot of time with him before he ever went to the trainer for his under saddle education. He learned to climb in and out of the horse trailer with no hesitation. He learned to walk on a wooden bridge, and to stand quietly while a blanket was flapped around his legs and over his head. He can be handled with ease and is respectful of your space.

He has been a joy to have in my life and I truly feel I am better for having known him. I can only hope that the next chapter of his life will be one where he knows the same care, kindness and love that he got with me.
Posted by Ponita in Real Life at 00:54