So... the meet and greet on Friday was the Meh. Didn't get vibes one way or another. He did a lot of talking, which was okay. Nothing worse than sitting with someone who isn't comfortable talking at all and having to carry the conversation all by myself!

We met at a local restaurant that has a nice lounge. Sat in the lounge for an hour and a half, had a drink and some finger food. Talked back and forth about inane stuff. Learned a bit about each other. Seemed like a nice enough guy. No weirdness emerged, so that was a good thing!

Haven't heard from him since... Whatever!

The Yowza! was the Keith Urban concert on Saturday evening. My younger sister and I met at the restaurant that is attached to the concert venue (local hockey arena/concert hall), had dinner (avocado spring rolls... oh my! delish!!!), yakked and people watched. We were sitting along a glass wall that looked into the hallway where all the doors into the arena seating opened. Watched security and other staff trundling back and forth, getting ready for the opening.

It was a sold out event - all 12,500 seats filled with screaming fans. Keith Urban is HOT!!! He can sing, he can play the guitar like a rock superstar, he writes his own songs, he's married to Nicole Kidman and he is one good looking hunk of man flesh! Snug jeans and short sleeved shirt (fitted) rounded out the picture quite nicely, thank you very much! Such a nice ass.... *sigh*

I still think my hearing is a bit off cuz it was loud but what a show! The stage had ramps down into the crowd on both sides and he made frequent use of them. There was a small satellite stage at the opposite end of the arena floor and he wandered through the crowd, playing his guitar, and spent some time down there singing several songs to the people who would normally be the farthest away from the stage.

At one point, he even jumped up into the stands right below where we were sitting but I only have a silly little Samsung mobile phone, so the pics are terrible and I can't seem to download them to my computer to see if I can zoom in at all. It was pretty cool, though. The guitar he was playing then (and he's got quite a few, both acoustic and electric) lit up all in coloured lights that switched colours and flashed with every change of chord.

He had all kinds of huge video screens so no matter where you sat, you got all the close-ups. Excellent crisp video feed, lots of lights and a light mist in air to keep things moist for those vocal chords. Everyone was in a bit of a fog that night... :-)

The crowd went wild! It was a great way to spend the evening. I love going to concerts and have really lucked out with some really good ones.

So no real juicy details to dish out about the meet and greet. Like I said before, no real expectations. It was pleasant... that's about all I can say about it.
Posted by Ponita in Real Life at 22:25 9 comments:

It's been months since I've done this but he emailed me last week and his profile on the dating site looks promising. We've emailed back and forth a few times and talked on the phone for the first time this evening. Sounds like he's got a decent brain in his head, so we've made plans to meet in the lounge at a local restaurant for a drink and a chat.

I've been down this road enough times now that I don't have any expectations. He does meet some of my 'standards', so he gets at least one chance! But the biggest thing is, he had the balls to contact me first. I am always amazed at the number of guys who repeatedly look at my profile (there's a feature that tells you who peeked), who put me on their 'favorites' list, but never get up the gumption to send out that first email.

All I know is, he can string enough words together to make intelligent sentences. English is his native tongue. He didn't grow up in a remote, rural part of eastern Canada. That's a good start, from past experience on my part.

Whatever happens, happens. It's not like I'm desperate, or searching frantically for a man. I barely have time to clean my house and walk the dog, so fitting in a relationship may be a bigger challenge than I need at this point, but we'll see.

This is Paul Brandt, a Canadian singer with fantastic talent. He was once a pediatric nurse in Alberta... Now a Country star making it big in Nashville.

Lila was enjoying a little Romaine lettuce this morning... she thought you might like to see how much she liked it. ;-)

A Thing of the Past

Nineteen years ago this weekend, this was what I was doing... 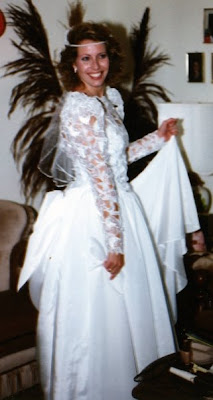 With six weeks off between Year I and Year II of nursing college, I managed to organize a military wedding and make that dress. I still have it... and am very proud of it. Unfortunately, my husband is no longer with us... he decided that life was not worth the air that he breathed or the love that I (and his family and friends) gave... but I cherish the memories, nonetheless.
Posted by Ponita in Real Life at 13:29 16 comments:

There are times in your life when you need to step outside the box and take a chance on something. Something that could possibly harm you in some way.

I am doing that. I am getting into a business that I think will allow me to retire from nursing and have a very comfortable lifestyle. Not everyone agrees with me. But the ones who are important to me have not said don't do it, just that they hope it works out for me. Time will tell on this venture.

I am willing to take that chance.

Here is someone who was willing to take a big chance... definitely click on this link - all I can say is "Wow! Good thing he had the numbers right." (Click on the crossed off speaker so you can hear it.)

http://www.mach-es-machbar.de/english/index.php5
Posted by Ponita in Real Life at 10:05 11 comments:

Nobody sings it like Bonnie Raitt... enjoy!
Posted by Ponita in Real Life at 18:57 6 comments: