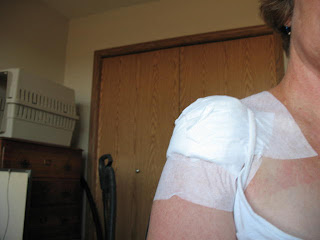 Well, I'm back, although my activity will be greatly reduced for a while I suspect. Left handed typing is not my forte...
I'm stuck in a sling for three weeks, not allowed to use my arm at all. I do have to let it dangle everyday, and
swing it passively like a pendulum to keep the joint mobile but that's about it.

Pain killers are on the menu every 5 hours, along with something to counteract the nausea I get from those meds. I'm a sensitive girl, you know...

Will pop around now and then between naps.
Posted by Ponita in Real Life at 09:08 17 comments:

Twice now in the past few posts here on my blog, some Anonymous person has made rude comments that just don't need to be made. They are aimed at being hurtful and are of a personal nature. I've deleted them but I do know a number of you read the first one and came to my defense. I honestly don't know who the person is but it seems to be someone who thinks they know me.

I have no idea who this anonymous asshole is, but I am going to change from allowing comments from anyone (including that anonymous bastard) to either google users or registered users only. I don't know if that will stop the nasty person but if they come back, maybe I would be able to track them down.

What I need from all of you is which one would be better. I know not everyone is a google blogger, but I suppose if you still have a google account, it would work. As for registered users, if anyone knows how this works, could you please enlighten me?

Since it is Sunday evening and my surgery is Tuesday morning, I need to make this change PDQ. So any input in the next 24 hours would be most appreciated. Thanks!
Posted by Ponita in Real Life at 21:34 20 comments:

It looks like we are finally having the hot summer weather that I remember from my childhood. The past decade, most summers have been too cool, too wet and just too damn short.

But we are in for a toasty weekend... and well into next week, if the weather pretenders are correct. And I am sooooo okay with that!

Right now, it is 30C (feels like 38). Tomorrow's high is 34 and sunny, so I am going to assume it may feel like 40 or more. The New Beau has invited me to his place for the weekend again and we are going to take a trip to the beach to check out the newly rebuilt boardwalk (the winter ice trashed it completely).

It will be so nice to have hot sand under my feet, the hot sun on my skin, and a hot man at my side.

I did say it would be smokin' hot this weekend, didn't I? I think 'in all ways' pretty much says it all.
Posted by Ponita in Real Life at 18:11 12 comments: 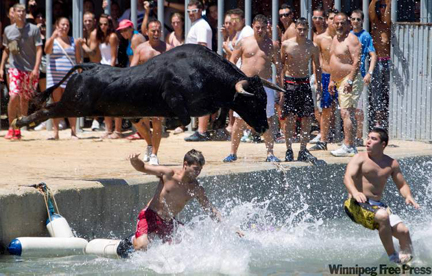 FERNANDO BUSTAMANTE / THE ASSOCIATED PRESS
In the annual Bulls to the Sea competition, diablo demonstrates, once again, his award winning form to take the gold cup. dialbo credits his unbroken winning streak of seven years to plenty of crimped oats, a gallon of imported guinness daily and a small personal herd of cows to maintain proper bodily fluid levels.
Posted by Ponita in Real Life at 14:35 13 comments:

We were talking on the phone last night and my New Beau was telling me of his conversation earlier in the day with a friend he hadn't seen in a few weeks.

When asked what was new, if he was seeing anyone, New Beau said he'd met someone (that'd be me, in case you hadn't caught on yet) that he reallyreally likes, and that we've been spending time together that he's reallyreally enjoyed, and he'd reallyreally like his friends to meet me.

I'm getting the distinct impression New Beau is becoming rather fond of me. He's even agreed to forego the Sunday afternoon baseball game with a longtime buddy (they have tickets to every other Sunday home game and have been going together to the games for years) to join me at a family gathering in honour of my uncle's 80th birthday. I think that says a lot! It'll be a whole crowd of my extended family to meet in one fell swoop. But he's game!

And I will freely admit that I am becoming quite fond of him as well. He's treating me very well, is respectful and funny and kind and affectionate. And willing to talk about lots of stuff. Doesn't seem to have any hang-ups that I've noticed... and I spent last weekend at his place.

He's coming over for dinner tonight after he's finished work. I've had a hankering for San Diego-like food with the summer heat we've been having so I surfed the 'Net for this recipe:

I was at a loss for the chipotle hot sauce until me nephew messaged me, saying he had some that my niece (his sister) had brought back from a shopping trip to the USA.

It's going to be a sunny and lovely 25 degrees today and with the sun beating on the balcony until well into the evening, I think we will have the perfect summer setting for fish tacos, fresh guacamole with tortilla chips (and the chips have sea salt and a bit of lime on them) plus some cold drinks.

Labels: best fish tacos ever, slight anxiety as surgery is less than 2 weeks away

The new man in my life (and yes, we have gotten to the point of deciding we really want to see where this takes us) has introduced me to Adele.

I've downloaded "21" from iTunes and have it on my iPod. I love this young woman's voice! The power and talent, not to mention the raw emotion, make her a wonder to listen to.

So far, this is my favourite of that album. I hear she is working on a third album, where she wants to do the producing herself.

I am half Icelandic... a Viking woman... and I've started taking more of an interest in my heritage recently. My exposure growing up was minimal, as I spent a good portion of my childhood away from Manitoba, where the largest population of Icelanders outside of Iceland exists, in what was first called New Iceland. The university here offers an undergraduate degree in Icelandic Studies. No, I am not going back to school, but I might take some of the Iceland language classes to see if I can get a handle on the language. Having watched some videos online of how to say phrases in Icelandic, I think it would be easier to learn to speak it without reading it too! Complicated alphabet that threw me off, but listening did not.

I was looking through different websites and came across many photos of the verdant green-ness of Iceland in summer. Most of the island is under glaciers but the parts that are not are exquisitely lush in summer. No trees, mind you... just grass... but a horse's fantasy to be sure!

Iceland is called the land of fire and ice for good reason. Being covered in glaciers and having very active volcanoes (the world has been reminded of that just a couple months ago) means the coexistence of opposites. I found a stunning photo, which I stole without permission so I won't mention the photographer's name but his copyright is on it, so he still gets all the acknowledgement of sure a fantastic image!

The foreground is glacier, the background is lava, with the aurora borealis hovering above. How can one not be awed by the majesty and terrifying power of nature shown here? I so want to go there... 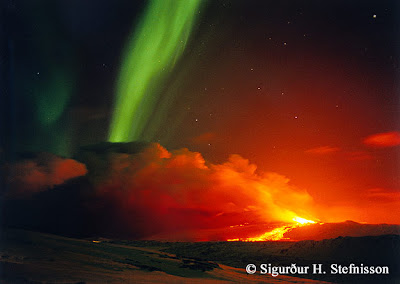