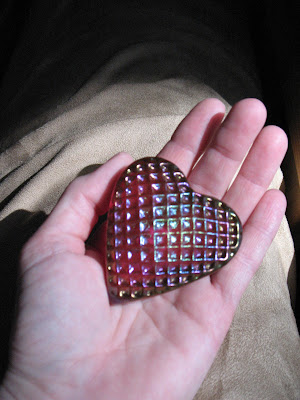 There are times in our lives when we feel life isn't going the way we want it to.

We have financial concerns, our jobs aren't fulfilling, the boss annoys us. The kids may be at an age where they are a handful and are trying our patience daily.

Perhaps our favourite team isn't doing well in the playoffs. The car needs more work and we hum and haw about fixing it or replacing it.

The house needs updating; the dog is chewing on the furniture; the cat horks up hairballs left and right.

But when you look at the big picture of life, those things are just tiny problems. Those are grains of sand.

When you look at the big picture, what really counts is the love you give to the people who matter to you. The family members you hold dear; the friends you hold close.

Perhaps you are blessed with a family who love each other dearly and get along well, congregating just to be together. And you hug each other when you see each other and tell each one how much they mean to you.

You have a few close friends in your life. Those you have known for almost all of your life and whom you have kept close to your heart despite time and distance. And the ones nearby who have become such good friends in a short time that you know you are destined to be best friends for life.

There are those in your life who struggle with personal crises that involve health and life. There are those whose families are grasping at the fragility of life, who know love is what counts and give freely and intensely and without thought to themselves.

There are those you have never met but have developed a connection with through the interweb fibers that tie the universe together. Those who feel the support and caring of those who are strangers in face only, because the hearts shine through.

For all of those that I am fortunate enough to count as family, I love you all immensely.

For those whom I have never met but with whom I have made that long distance connection, know that my heart aches with every hurt you experience and wishes there was more I could do. I fervently hope that all eventually works out in your favour and life returns to a balance that works for you and your families.

To those who have become my closest of friends, I am so proud to be a friend to you and love you dearly.

And one who is becoming a close friend... PJ... you too are special to me. You have been there for me, unasked, when I needed a shoulder to cry on. Thank you for that.

Because life is an unknown quantity, please show those you love that you care for them and tell them they mean everything to you. There are no guarantees in life. There are no certainties, other than being born, living in some capacity for some length of time, and then the journey here on earth ends.

There has been far more than my share of heartaches and losses in the half century I have spent on this planet. And it seems to have made my heart bigger, more caring, more capable of reaching out.

And that can only be a good thing.

Labels: Show the love you feel before it is too late.

My End of Days

... will occur in approximately 16,600 days, if this estimation of life expectancy holds any water.

Interested in finding out how many you have left and how old you will be when you kick the bucket? Click here and answer a few questions and bingo! It will tell you.

This past weekend, I awoke to find the season traveling backwards in time... back to winter and cold. It was barely +2C when I let Zoë out in the yard for her morning constitution. The snow was falling, the wind blew from the north, nipping at my nose.

I was not a happy camper. Had we been foresaken by Mother Nature completely? Were we to be forever locked into a stalled season of cold and ice? It appeared that way. I had to put my winter jacket on... the high that day was a paltry +5C.

(click on the pics to see the gory details) 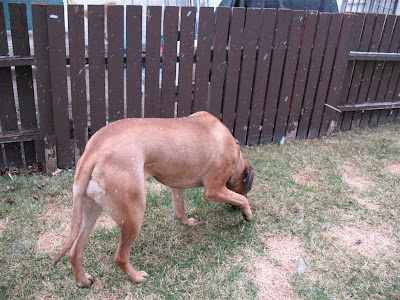 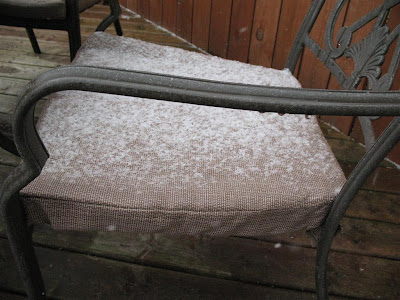 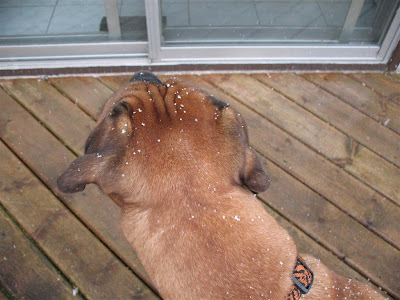 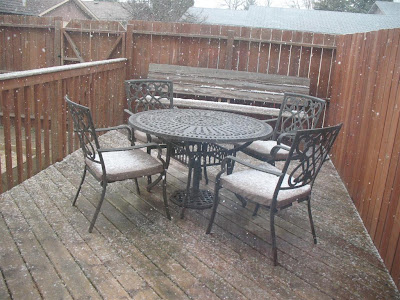 And then Sunday dawned... bright and sunny... warm with a gentle breeze. My front garden displayed these little lovelies, all pink and perky for all the world to see. With temperatures reaching somewhere close to +20C, it was a far cry from the previous day... and just in time for Mother's Day! 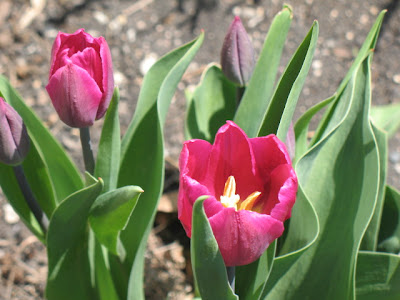 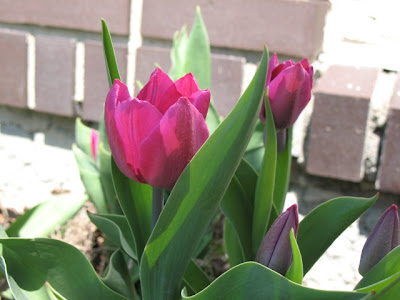 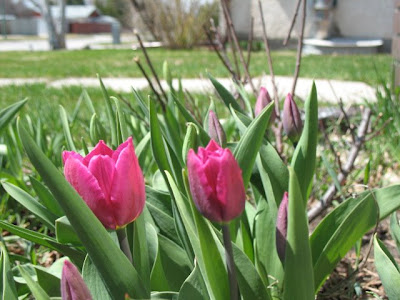 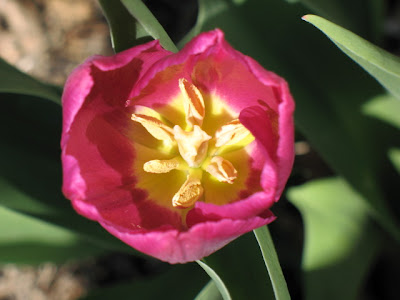 Labels: Is it here to stay?

A Rose Is A Rose 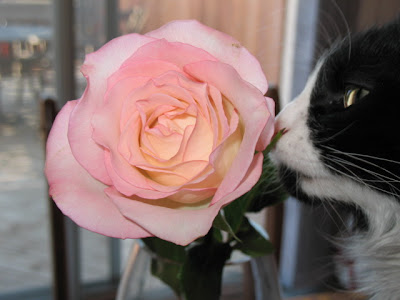 It's a beautiful rose and it's opening up very nicely. However, it has to live on top of the fridge as you know who wants to chomp on it. Taking it down today to take this photo also meant stopping That Damn Cat from having it for breakfast!
Posted by Ponita in Real Life at 10:28 6 comments:

Labels: But what does it mean? 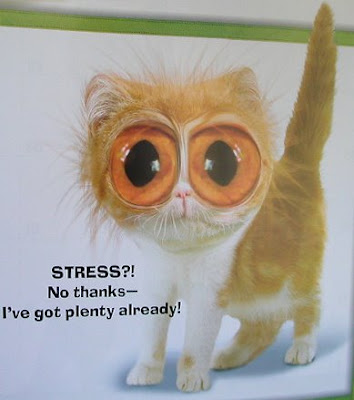 There are times when I wish I could fly away to another continent and not have anything to do except sip a drink and sit under a palm tree on a beach somewhere.

I have been so freaking busy the past couple of weeks, it has been insane! When I have not been at work, I have been filling my time with a gazillion other things that have prevented me from posting, and have limited my commenting time on all your blogs. It just sucks!!!!

Gardening just about did me in last weekend and I finally had a massage this morning to work out the kinks from my back and left hip, which has been complaining mightily since then. So everything I have done this week has been accompanied by ouches and grimaces and a hand on my hip as I get up and walk. Kinda like I'm actually 91 instead of 51. Or as my Mum used to say, 'as old as dirt.'

My dog has donated blood (which means I have to take her to the vet clinic for that), I have assembled a BBQ (mostly - there is one piece that just does not fit), there have been birthday parties attended, I had a day surgery procedure done for 'female' issues, I have been on several 'dates' with several different men (some terribly disappointing, others not so much), I have been talking to a financial advisor about ways to get out of debt sooner, I have been picking up extra shifts at work to make ends meet, I have been trying to finish off the painting/decorating of my bedroom (where I discovered there are no 90 degree corners so using a mitre box becomes a challenge), my old cat has been puking up hairballs all over the house and I've had to clean the carpet multiple times...

Well, you get the gist of it. Plus yesterday morning the alarm system in the house went psycho and I couldn't shut it off. Needless to say, that required a call to the alarm company's service department, instructions on how to unplug it, and an appointment for one of their service guys to come out next Wednesday. Although it was kinda funny watching the cats scurry around the house trying to get away from that loud beeping.

Plus work has been pretty damn crazy too. Some shifts have been so busy, the only time I get to sit is when I am on a break. And there have been a few times when I have been about 1 1/2 hours late going for a break just because it was too busy to go when I was supposed to.

Needless to say, my feet hurt... more than normal.

I am tired... I have been working mostly evening shifts, so my sleep has been rather abbreviated. You see, I have this hamster in my head... in one of those exercise wheels... and after I get home from work, especially on evenings, I need to unwind and let her spin in her wheel for a bit before *she* gets tired enough to go to sleep. More often than not, that is around 2 a.m. Now that probably wouldn't be a problem, except for one thing. I don't sleep in. Ever. I am almost always out of bed before 8 a.m., no matter what time I went to bed. Going a couple weeks with 6 or less hours a night sleep leads to being pretty much a zombie. Which I can ill afford to be.

But anyways... enough bitching and complaining.

Big hugs to Jimmy for sending me a few awards... I guess he thinks I'm special (no, not yellow bus special...) and wanted to let me know that. Thanks, Jimmy. You are a doll!

And Mapstew, thanks sweets, for giving me the Lovely Blog award! Big hugs to you as well. Not sure I deserve any of those awards, and I won't do the meme thing and tag a bunch of folks, but I will display them with honour...you two guys are awesome!

To everyone who has been asking how the date went... well, we had a lovely time. He brought me a single pale pink rose. We talked and laughed and had a lovely dinner.... even took the dog for a walk and talked some more. (I made Jambalaya with shrimp and chorizo sausage plus rhubarb crisp for dessert, with vanilla bean ice cream). Other than that, I can't say. Don't know if this will become something long term or not. He's a nice guy but this was the fourth time we'd seen each other, so still too early to say.

It feels like fall again... We actually had snow fall this morning. Did no one tell Mother Nature it is already Spring? And it should be +20C? And not +2C?!?!?!? The overnight low will be -1C here tonight. When we were walking the dog after supper, we could actually see our breath. *sigh*

So, I am hoping things will slow down now. So I can catch my breath, get my bike out of the shed and go riding (unless it snows again... then I will need chains on the tires), and just relax when I am not at work. I dislike not having any down time.

On another note, I got an email from my girlfriend the horse trainer that she's got a serious enquiry about my horse, so it is possible he may be sold soon. I have been weaning myself off riding, as when I do ride, I get very frustrated because my back pain severely limits what I can do. So I have only ridden a couple of times in the past couple of months.
Posted by Ponita in Real Life at 21:48 10 comments:

No Time Left For Me

Hopefully things will slow down soon so I can get back into my blogging routine...

Thanks to Map for the lovely award... will post about it when I can!