... and migrating once more. My apartment is starting to accumulate these: 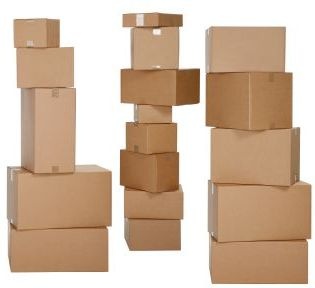 (This is the main reason I've not been blogging much at all. Lots to do.  I am sorting through everything I own yet again and getting rid of things I just haven't used. I still won't be blogging much until all the dust has settled and I am in the new place. I do get out and read things; don't always comment but do when I feel I have something to say.)

One year ago in April, I moved into this apartment. It was a necessary move, what with my shoulder being trashed and finances having swirled down the drain because of being off work and having the Workers Comp Board deny my claim. (A pox on them!, I say. But it has been sent in to the Review Panel so hopefully they will change their tune and allow my claim... which, if they do, would mean they owe me a good sized chunk of change.) The house was sold and I became an apartment dweller for the first time in about 20+ years. 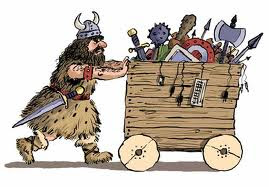 So in April of this year, I will once again be moving. Into another two bedroom suite. But not in a new building (I was the first, and have been the only, tenant in this suite so far). This time, it will be into a very old building (~100 years old but lots of updates like plumbing and electrical) that may or may not have been an actual gigantic house at one point in time.

This one is four blocks from the hospital, so I won't have to pay for parking at work... I can walk! That means I can reduce the wear and tear on my car, reduce my spending on gas, and change my car insurance to pleasure (no, not that kind of pleasure! just means I don't drive it to work. not sure why they have to charge a different rate for that... but who am I to question the gov't monopoly on auto insurance in this province?). Savings all around! Plus the rent is $145 a month less. I will have to pay a bit more for utilities, but that's okay.

This place is slightly larger than the current suite (~50 sq. ft.) and is on the main floor (which is great, because that means not having to lug everything up the stairs... I'm getting too old for that!). It also has 12 foot ceilings so feels a lot larger. It has two doors - the front main entrance where all the suites have a door, and then a side (private) entrance right into the kitchen. It also has a washer and dryer (like the old place) so that's a bonus too. And the landlord allows cats, so Pips and Lila are safe. (Phew!)

My youngest brother will be living with me. He'll be moving in in June, once he gets his business dealings all settled and changes from self-employed to a salaried employee (yay! for benefits!). His health isn't great and sharing a place with him will mean that if he needs help, I will be there for him. It will be nice to have some company and I know Pips will thoroughly enjoy having a second lap to ensconce herself on. He loves cats, so these two will not be an issue.

The suite is nicely laid out for the two of us as well. One bedroom is at the front, then the living room and kitchen, and the second bedroom is at the back. That allows each of us a bit more privacy than if the bedrooms were next to each other. The bathroom (with stacked washer and dryer) is off the back of the kitchen.

So paying less for rent, especially when Little Brother is in and sharing it with me, will mean that I can really start making a dent in the debt that's accumulated over the past year. Plus the savings from the car end of things. And just think of the exercise I will get with that walking! It's a really nice area of the city too, with nice little restaurants, and so close to the rivers, parks and lots of places to ride my bike.

Which reminds me... I had better take said bike in for a complete tune-up very soon. Spring has come very early to this neck of the prairie and although there is still plenty of time for a spring snow storm, I'd like it to be ready to roll!

Things are in a bit of a state of upcoming rapid change, and in keeping on top of that, I've not really been up for blogging much. I do try and get around to comment here and there, but I know even that is a bit remiss on my part.

So, apologies to anyone who thinks I've been ignoring them. I haven't. Really. I am just in a different space right now and blogging regularly just isn't in the cards.