A squirrel he ain't

It's been a few months, hasn't it? I'd gotten a couple of nudges on my previous post so I had to take a few moments to check in. For whatever reason, I just haven't gotten back into the blogging vibe. Thanks for the Happy Sesquicentennial, LX, and the query about my wellbeing, Mago! Happy 4th of July a bit late to all my American friends! I hope you all had time with family and friends enjoying the holiday.

But all is well with me and the kitties. Frosti is six months old now and a real hellion! He torments the girls endlessly and I sometimes have to put him in a time out in the bedroom. He bites. A lot. Not with me, as he plays gently and doesn't even use his claws, but with them, it is tackle and bite constantly. I sure hope he outgrows this phase soon because I feel bad for them! Tanner was so much gentler when he played with the girls. *sigh*

I have renewed my mortgage for three years, after which time I am selling the house. Retirement will be 2 years after that and I want to be a debt free as possible when I stop working. So I have a finite amount of time to fix the house up for selling. Best get my ass moving!

At least I now have a mostly normal energy level. I've found my thyroid hasn't been working normally (probably slowly declining for years but really plummeted in the past year) so a few blood tests and I am now on thyroid medication plus a bunch of supplements to support thyroid function. It has required a few tweaks here and there but I feel so much better! I now have both the mental and physical wherewithal to tackle everything that needs doing. I am doing things in steps (and not really in this order... #7 is actually first.):

1. Scrape all that stipple crap off all the ceiling! Besides hating how it looks, there are cracks in both the living room and kitchen ceilings that need repair and you can't fix those and patch the stipple without it looking like a horrible botch job. I've seen a youtube video on taping a 6" putty knife to the floor attachment of a shopvac and using that to scrape it off. I'd done the bedroom ceiling a few years ago up on a ladder and what a mess! Looks great once done, but holy moly that stuff gets everywhere. I'm hoping this will be much neater (and hopefully faster!).

2. Repair all the cracks in walls and ceilings caused by the saggy main beam and subsequent relevelling of the house. That was a slow process and took about 1 1/2 years before the house finally adjusted to its final form. The teleposts I installed in the basement have not needed tightening for about a year now so I think it is finally done. No point patching cracks if the house is still shifting.

3. Once steps 1 and 2 are done, paint! Ceiling and walls in every room. Good thing this is a small house...

4. After completely all that messy stuff, time to install the laminate flooring that has been stored in the basement for the past 4 years. When I renovated my bedroom, I had purchased some laminate (the nice thick stuff [14mm] with the foam backing) on sale (I think it was 30% off). I liked it so much I went right back and bought enough to do the rest of the upstairs (minus kitchen and bathroom). I am sure it is well acclimated to my house's environment by now.

5. I need to have an exhaust fan installed in the bathroom. There are NO exhaust fans in this little old house anywhere so I tend to run the furnace fan whenever I shower. I also need to replace the bathroom window as it is rusty (it's right in the shower but given the tiny size of the bathroom, there really wasn't anywhere else to put it). The tub surround I put in a few years ago will be ripped out and either a new one, or tiles, will replace it. I'm happy with the sink and toilet that I've already put in. The floor with be changed too, as right now it is the same as the kitchen (there was a leftover bit of vinyl flooring from the kitchen that was done before I bought the house).

6. And the cherry on top will be a kitchen gut and redo. At first, I had grand ideas of ripping out the wall between the kitchen and living room to make it open but given the cost and time that takes, I have decided to update it without major structural rearrangements. (This is, after all, to improve it for selling it.) It is small (I do live in a little house) and at 8x10, I have limited space be creative. But the plan is to just move the fridge a bit to give me more room to expand the number of cabinets and counter space. By just doing that, I will be able to double what exists now. So this will be a yank out of all the old cabinets and flooring and replace the same. The local hardware store has lovely vinyl laminate flooring that I have had experience installing in a former boyfriend's house and it is 100% waterproof so even if there is a major water leak, the flooring will not be damaged. (I'm sure the rest of the floor would be, but this stuff could be pulled up, dried and reinstalled.) The new cabinets will be from Ikea and I can install those. I'll need help to hoist the upper ones but the rest won't be an issue. I like their rail system to secure the cabinets to the wall. I will put a microwave with exhaust fan above the stove. I've already bought a new sink. Do you know how hard it is to find a 1 1/2 bowl sink to fit a 24" cabinet?!?

7. This is really #1! The basement windows... what a headache those have been! The two on the east wall are at ground level. Right at ground level! And with old wooden frames, you know what that means. Water. In my basement. With the spring melt and heavy rain, the water flowed unimpeded through the rotten wood. Luckily, the basement floor is bare concrete but what a pain in the ass! I have fans and a dehumidifier running 24/7 because of damp concrete. The shopvac got many a good workout. Finally found a solution. Glass block windows with vent for air circulation. Set directly into the concrete, with the bottom row of bricks being concrete to prevent further water incursion. Watched a youtube video on how to do that. I also need to redo the window in the laundry room in the basement as the glass is cracked. At least that one is higher up as the ground slopes a bit east to west. I think I will do this one out of polycarbonate. The dryer vent and water line for the hose bib run outside through it. Much easier to drill holes in plastic! These take precedence over everything else right now.

So that's the blueprint for the next three years. I work at work and will then work at home. Don't get me wrong! There will be plenty of feet up on the recliner time too, as well as getting out and about. Will post pics when I have things on the go.

In the meantime, here are the cats. 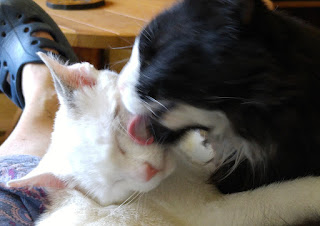 A rare moment of quiet The usual state of affairs 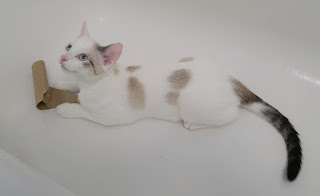 The tub makes a great background 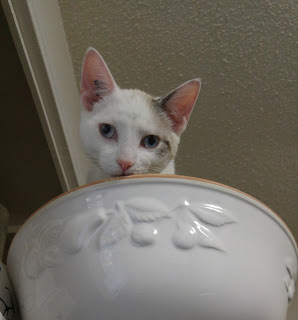 Stalking me from on top of the fridge 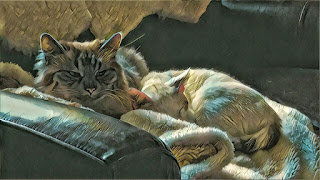 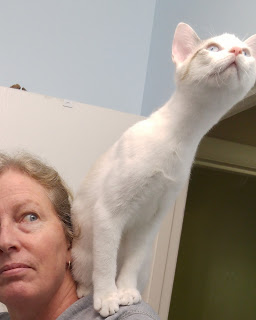