Welcome to my dungeon

My basement is rapidly becoming a windowless dungeon.

Okay, maybe not a dungeon, but definitely windowless!

My tiny little house,which I am certain is based on this Sears kit home, had such tiny windows in the basement foundation that only a 10 year old boy could fit through one. Plus the two that were in the rec room had steel mesh bolted on the outside to protect the glass from the gravel lane. That, of course, made it impossible to use them as an emergency exit! There is one other, in the laundry room, that the dryer vent and plumbing for the outside tap run through. Same size.

Here in Central Canadia, in the Land of Ice and Snow (and cold, for a up to 6 months of the year), single panes of glass are as useless as putting a layer of plastic food wrap over the opening.

This is what has become of those useless things. Well, the two in the rec room, at least. I still have the laundry room one to do. I unbolted the metal screens from the windows. You can see that these things are literally at ground level. Which is idiotic. But it is what it is. 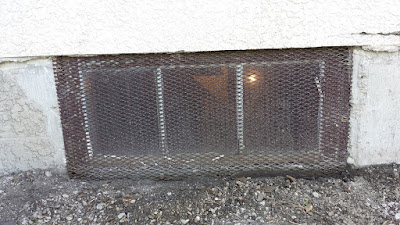 I then removed the window. Using pressure treated plywood, which you can use to make a wooden basement if you so desire (and people do ~ and they work well), I covered the opening. It is glued in place with construction adhesive and secured with screws. Nice snug fit. 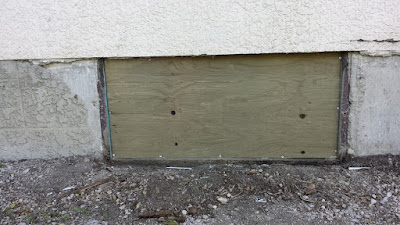 I have wood preservative rated for below grade wood that will be applied to these pieces of plywood (and the wooden frames) once I have them all in place. I was told I could put several coats on to make sure it soaks in well, and then once it is well dried, the plywood can be painted. I will get some light grey to match the concrete as best possible. 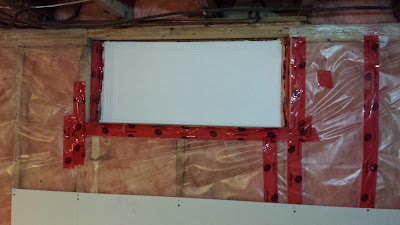 The area between the former windows and the front edge of the wall framing will be filled with pink insulation, covered in plastic, and then drywalled over like it had never existed. I have lots of adjustable lighting in the rec room (part of the electrical upgrade that Old Fish and I did during the winter) so no worries about it being too dark. Those windows didn't really add any lights anyway!

I work this week and then have 2 weeks' staycation, during which I plan on finishing the windows completely, and the drywall in the basement, and build a couple of storage shelves under the stairs, and make a lattice cover for one side of the stairs where I have put the cats' litter box. The rec room side of the stairs will be drywalled. The other side is in the furnace room. I will make the cats a little opening ~ that the dog can't fit his head through ~ in the lattice. It will be on hinges so I can pull the box out to clean it.

I'll let you know how much I actually get done.