I've been spending time this year, more so than in the past, looking at my life and where I want it to go in the future, both short term and long term.

My nursing career has spanned 18 years so far... well, 20 if you count when I started my training back in 1989. And I have worked in a number of different areas in two different countries and five different cities. It's been hugely responsible for my growth into the person I am today. And coupled with some pretty profound life experiences in my personal life, I am so not the person I was 20 years ago.

I am a nurturer, through and through. I always have been. Even at the age of 16, when my oldest sister had her first baby (he's 35 now, by the way) and her father-in-law had her husband and some of his friends (one of whom became my first boyfriend later that year) help him dig a basement under a house. I played Dr. Bob (anyone remember the Muppet Show??) to all those guys with their splinters and blisters and cuts and scrapes.

Nursing is something I love... my brain really gets into the nitty gritty of it... and you couldn't gross me out if you tried... but now my body is saying enough is enough. I have back issues both from work and from getting bucked off a horse two and a half years ago. I just don't bend too well anymore. My feet really let me know when they've had enough of the standing... which now often happens by morning coffee break. And my hands are shot. I've got carpal tunnel syndrome in both and have had surgery on my right hand (geez, that was four years ago already) with the symptoms returning because I haven't changed what I do.

So to make changes, I have set the wheels in motion to be in business for myself. The future looks good but at this stage, I am not seeing a monetary return as of yet. Still a few hurdles to leap over before that starts happening. But the potential is excellent and I have set a goal to be making enough money by next June to retire from nursing and concentrate solely on my business.

So along the road to this shift, I have been paying attention to my own self, to behaviour patterns, to what I need to change to make this venture successful. Both from a professional standpoint and a personal one.

One of the things I have to do is to be brave. Setting out to be self employed, to be an owner/operator of a business, is a scary prospect. If I don't put the effort into it, I will not succeed... it is that simple. Basically, I have to grow a set of balls and not be afraid to use them. Get out there, brave the world, handle the rejections and objections, and revel in the successes when I experience them. I am very fortunate to have a number of people in the same business who are mentoring me and helping me find my way, with encouragement and support and positivity. I couldn't do this without them and for that, I am eternally grateful.

But I think an even bigger thing for me is in my personal life. I have been single for just over two years now. I dislike being on my own, but I have become brave enough just very recently to say to hell with it, and to forget about looking for someone. I have, for reasons unknown to me, been attracted to guys who are (for whatever reason) unavailable. Those who were too afraid of whatever hurt them in the past to start something new, even though they were out there on the dating websites. Those who started something new and then weren't brave enough to deal with the intensity of emotions that went with it. Those who pretended to be interested and then bolted. Those who live so far away that starting something wasn't an option.

So for whatever reason, I would keep trying... trying to see if there was a glimmer of hope, but only usually succeeded in getting frustrated. Yeah, I know... I've read "He's Just Not That Into You", which was recommended to me by the guy who couldn't handle the intensity. I actually thanked him for that because it helped me a lot, but it wasn't until recently, in thinking on what I have been doing over the past two years, that I really came to the conclusion that I have been wasting time and effort on guys who just have not been worth that time and effort.

So I am now refocused. I am turning that energy back onto myself... onto improving who I am so that my life will be one that I can be proud of and happy with, whether or not there is a man in it. Because I certainly won't die if there isn't a man in it. Sure, it would be nice. But being single isn't the end of the world. The focus of my life now is to take care of me. Me and no one else. Well, me and Zoë and BB and Pips and Lila... and Thunder too, until I find him a new home.

But I am sure you get the picture. No more Ms Bend Over Backwards to make someone feel wanted, needed and special. Unless they become a client... that's different, because that will help my business grow, which is what I want.
Posted by Ponita in Real Life at 21:35 9 comments:

There's a reason but I'm not sure what it is... 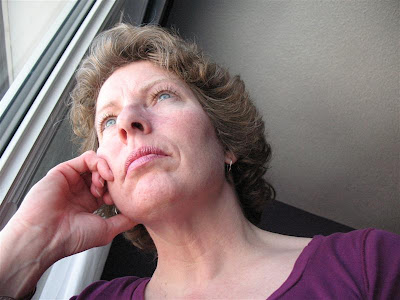 Life has been busy of late. I work in a hospital... as a nurse... which means shift work, of course.

The dog and cats are pretty good with all that and don't seem to mind my comings and goings.

I am also in the beginnings of a business venture that is in its infancy and will hopefully become successful enough to eventually replace my income from nursing to the point where I can retire from the hospital and work for myself. Which means that most of my spare time is dedicated to growing that business.

I long for some freedom and control regarding my financial future because, as it stands, things are damn tight right now and I have to work extra at the hospital to make ends meet.

Which, of course, cuts in to the time I can devote to my business. Plus there are legal requirements that must be met to be able to conduct business, which means submission of paperwork, attaining of licenses and such. And there have been delays in that regard as well, caused by human error (yeah... mine... I take full responsibility...). And that has raised the frustration level just a tad, but reaching those goals is in sight and dates have been set to get everything into motion. So that's all good.

But life has a way of throwing you curve balls and at the time, you have no idea why or what they mean.

For the past six months, I have been advertising my horse for sale because a back injury precludes riding completely. I can manage in general life quite well but the pelvic rocking (awaits comments on that one...) that is part and parcel of riding a horse causes me incredible discomfort and just isn't worth the risk of doing further damage.

So as much as it pains me emotionally, I have Thunder up for sale. It is very expensive to keep a horse as a pet. And since I can no longer ride, I need to get out from under the board payments. That would ease the financial strain quite a bit for me at this point in time.

Last Wednesday, a woman and her two teenaged daughters came and tried out Thunder for the second time. They decided they wanted to buy him and were just waiting for dad to get home on the 27th to finalize payment details. They didn't put a deposit on him but did ask that they be notified immediately if someone else came along and wanted to buy him. They were excited and kept saying they were really looking forward to having him.

Now a horse is not an easy thing to sell. This one is young but well trained, a real character but respectful, very friendly and gets along well with other horses. He loves to do stuff and would be perfect for a couple of girls to ride every day. I was very happy with where he would be going, as it seemed like the perfect home for him.

I wasn't going to count my eggs before they hatched, but I was getting excited that I would finally have found a good home for Thunder, and would get some money that would certainly help out the old bank account.

Today, I got a text message from my girlfriend, who is a horse trainer and does the selling for me. The people found a different horse and decided to buy that one instead. So needless to say, I am hugely disappointed. Hugely is probably an understatement... I am crushed because I thought my horse, whom I have had since he was a yearling and love him to bits, would be going to a really great new home. And because I desperately needed the money.

So now... I have to wait to see why this happened. What else will come along? Who out there will be a better new owner for Thunder? So I am left pondering the universe and trying to see that light at the end of the tunnel... and hoping it is not a damn train!
Posted by Ponita in Real Life at 20:02 10 comments: 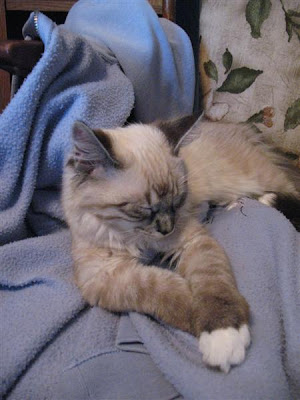 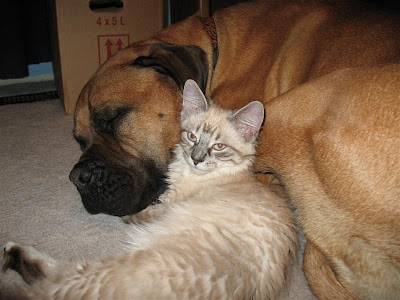 I haz no front feetz! 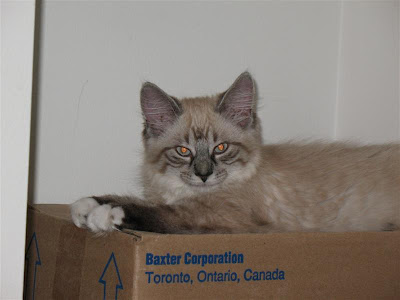 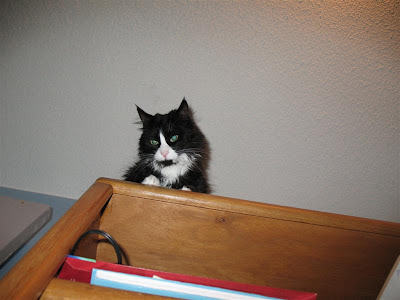 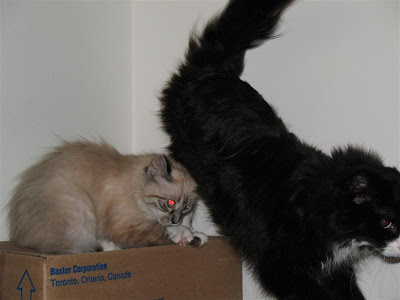 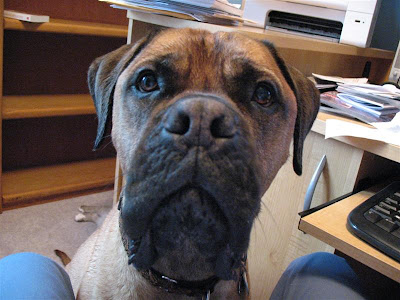 WHAT?? There are little legs coming out of my backside?
I can't bear to look!! DO something!!! QUICK!!!!!

And now... for your viewing pleasure... the ongoing Saga of the Dirty Dog.
(Turn the sound down unless you enjoy the sound of a creaking chair...)
Posted by Ponita in Real Life at 22:39 8 comments:

A happy, upbeat tune from a couple of very talented young Americans...