So... having resorted to the old blogger interface yesterday to turn OFF word verification to allow Mago to comment, I awake this morning to some anonymous prat going on about Canada Goose jackets. I'm familiar with the jacket. Why he (she?) felt it necessary to ramble on about them on my blog is beyond me.

That being the case, I have turned wv back on. Mago, I am keeping the old interface. Let's see if you can still comment.

*sigh* There's always someone who spoils it for everyone else, isn't there...
Posted by Ponita in Real Life at 06:02 11 comments:

It seems that there are issues with comments on various blogs. I have no way to comment on a blog that has the embedded comments form. And Mago cannot comment on my blog because of word verification.

I've switched to the new blogger format and have not been able to find the place to disable word verification. It is not on the comments settings page. That would be the logical place, one would think, but obviously someone at google did not think the same.

So if any of you more technically advanced bloggers out there could help me, it would be most appreciated! With both issues mentioned, if possible.

Yesterday, after another exhausting three hour stint of nurse-y type work at the local hospital, I trundled off to the physiotherapist for my weekly appointment.

Given that everything was wound up tight, the lovely (and at times pleasantly brutal) Sarah dug her amazingly strong fingers in and around the muscles and tendons of my shoulder and upper back. She prodded and pulled, twisted and turned... me, that is. She pretty much stood her ground.

Now that I am back at the job, the tendonitis that I've had in my elbow/forearm for years (it comes and goes) has decided to rear its ugly head once again. So she worked on that as well, and showed me stretches and strengthening exercises.

I have a sheaf of papers with exercises on them sitting on my table at home, as reminders of how much work I have to do to get this shoulder (and arm) back in the swing of things. Lila likes to sit on them.

And because it works well for me, we ended the session on a pointy note. 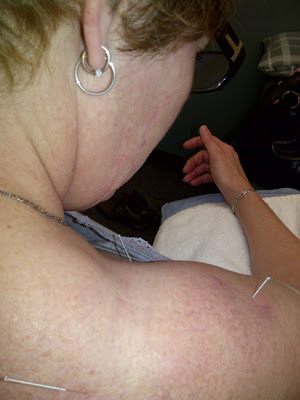 There was one more farther down the back of my shoulder but considering I took this with my Blackberry, behind my head, unable to see what I was doing, I think it's good enough!
Posted by Ponita in Real Life at 10:58 8 comments:

I am in my second week of being back at work. That means, of course, that there are early mornings again, rising well before the dawn. (Well, at this time of year, anyway... summer is an entirely different animal.) So no longer can I just crawl back into bed after a trip to the toilet to empty that tiny bladder of mine at 5:30 a.m. That's the time the alarm goes off, so up I get. But this week, it is only three days. And the same next week. The following week will be four days. And a meeting to plan Phase B of my "graduated return to work."

It's going as expected. My shoulder gets tired and a bit achy, but given that I have the strength and endurance of a wet noodle, I'm actually doing okay. I do my exercises and stretches. I go see my physiotherapist once a week and let her poke and prod. Today, because my appointment with her was right after my three hour stint at the hospital, she decided to pop a bunch of acupuncture needles in my shoulder and neck to help with the tightness and discomfort. Seven hours later, it actually feels pretty good. Tomorrow might be another story, though. Sometimes the 'beaten up' feeling doesn't arrive until the following day. But that's what ice packs are for.

It's colder than a witch's tit here in the centre of Canada. The whole of the Prairies is under a huge icy cold air mass flowing down from the Arctic. It is -28C right now and the wind has died down to nothing so there is no wind chill value to report. Earlier it was -38C with the slight breeze that was blowing and for those who live in Fahrenheit Land, that is almost identical... -40 is the meeting point for C and F. Up in the northern part of the province, they've had wind chill values of -50C. Exposed flesh will freeze in 2 - 5 minutes at that temperature. Just so you men know, you don't pee outside in that kind of weather!

It has been one week now since the MoS decided that life as it had been was not what he wanted. I feel kinda lost. We spent every weekend together for so many months, and would talk virtually every evening during the week. All I can say is, I miss him very much.

Looking back, I guess there were signs. I think. But we talked about so many things, things we'd each experienced, fears we each had, things we were looking for, so I guess I wasn't expecting something like this. Because he'd been so open with me about so many things, being blindsided has completely floored me. I really don't know what to do other than just given him the space he seems to so desperately want. 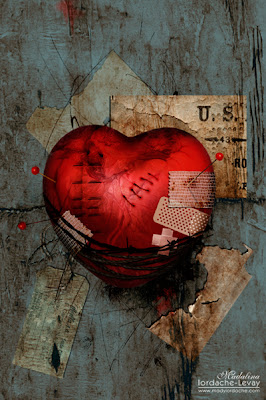 Last January, my heart took a beating from the Long Haul Brit. This January, it's gotten trashed by the Man of Steel. I'm thinking I am going to keep it to myself from now on. I don't know if it can take any more of that. 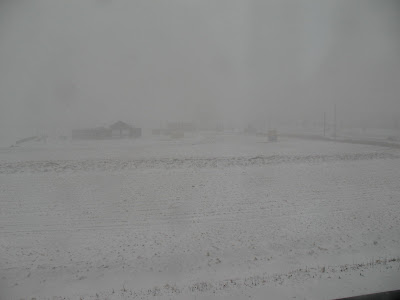 
This is the view outside my window right now. A wintery whiteout.


It's rather how my heart feels right now too.


The last post depicted a woman watching a man walk away. That's pretty much what happened to me last Wednesday, as the MoS told me that he was wanting a way out.


He has issues with commitment, stemming from a devastating end to his marriage when his wife cheated on him, and left him, saying she needed to "find herself".


He is very "house poor" right now and admits to feeling guilty about being unable to afford to "show me a good time".


His allergies continue to wreck havoc with his mood and concentration and he feels he is often short tempered with me (and others) and doesn't feel it is fair to inflict that on me.


He tells me he does like me and admits we get along well. On Friday when we were exchanging the things left at each other's homes and having a bit of a talk, he told me how much he appreciates the efforts I had put into trying to find solutions for his allergies, outside of what the doctors were doing. Those things have made a lot of difference but he still struggles with significant skin problems.


So after nearly seven months (one week shy) of spending virtually every weekend together, I am now back in my apartment (to the cats' delight), alone and wondering when things started going south.


I have never really cared about the material aspects of dating, and was quite content to spend time together, watching movies and tv, having BBQs, evenings sitting around the firepit (in the summer and fall) sipping a few drinks with the music on, going for drives, visiting family and friends, and just enjoying his company. We talked a lot, laughed, danced, discussed, joked and generally had fun. No pressure... just fun.


He knows I care for him a great deal. I know he cares for me, but he told me he does not feel the same way as I do. (And that means...???) Whether it is his fear of getting involved with someone, to fall in love, only to have it fall apart at some point in the future, with the resulting heartache (as if anyone has a crystal ball that can foretell that) or if he really just isn't that "into me" anymore, I don't know. I may never know. 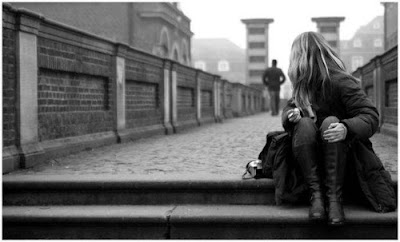 Back to the Salt Mine

I had a meeting with all interested (or not) parties today to set up my "graduated return to work". That may sound a bit pretentious, as if I've finished some kind of fancy yearlong training program, but it's just being cautious.

After all, the last thing I want to do is re-injure that shoulder. Or any other body part, for that matter.

So I have the next four all weeks laid out.

Next week, I will three hours on Tuesday and three hours on Thursday. You might not think that that is a very strenuous schedule, but given that I will have been off work for 16 days shy of a full year and that I could not lift my arm above (or even close to) shoulder height for 10 of those 11 1/2 months, it's fair to say starting slowly is a good way to begin.

The two weeks following that first week will still see me only putting in three hours at a time, but I will have moved up to Monday, Wednesday and Friday. The fourth week I will do three hours on Monday, Tuesday, Thursday and Friday.

That takes us to Feb. 3rd. All interested parties will meet again on Feb. 2nd to reassess my situation and see where to head next. If all has gone well with my reintroduction to earning a living, I will see the hours bumped up. I'm not sure if they start me on fewer days again or what. Guess I will have to get that far to find out.

Physio has been progressing well. I have about 85 - 90% of normal range of motion in my shoulder. I've been working on strengthening the withered muscles, but that takes time and because it gets pretty achy after a workout with weights (all of 2 lbs!!), I have been doing the weights every other day and stretches on the rest day. That seems to be working well. It will soon be time to bump up the weight slightly to three lbs. It's amazing how much muscle mass is lost when you can't move something normally! I am sure I will eventually get back to having a(n almost) fully functional shoulder, given time, no setbacks and continuing with physio.

It's going to weird to have to get up before the crack of dawn again.... Not sure I am looking forward to that part, but it will be nice to have some semblance of a 'normal' life once more.