It wasn't part of the short term plan. What I was planning to do was to save some money. Pad the kitty account. Recover from the financial cost of Tanner's illness.

I went to Petsmart to buy a new cat bed for the girls. One of those little cave style padded getups where they can nap in soft dim warmth. I bought the cat bed. And an occupant.

I adopted a 10 week old kitten.

The pet stores here are only allowed to have rescue pets for sale (cats and dogs). They have pretty much shut out the puppy and kitten mills in the province from using pet stores as sales venues. So when I went to Petsmart (and I had never been in this particular location), I was immediately drawn to the adoption kennels conveniently located right next to the cash registers. How can one not be?

There were two adult cats peering at me. And a little white ball, sound asleep and oblivious. One of the women working there asked if I wanted to see one of the cats. I asked about the sleeping kitten. She said he had been in the store for about an hour, having just been brought over from the Humane Society.

We go into the cage area, and she opens the kennel. Up pops his head and two ice blue eyes squinted at me, followed by big purrs and little chirrups. I picked him up and he climbed right into my arms and rubbed against my chin. The woman told he he was super friendly. Understatement there. He crawled all over me, onto her and then jumped onto a little table next to her. She told me what she knew of him (from his HS folder). I asked about adopting him. She told me a woman had called about him three times already but wasn't able to come see him until after work, but that adoptions are one a first come, first served basis, and cash only. The adoption fee does not go through the store till, as they turn the money over directly to the Humane Society.

So, long story short, I did a big cash advance at the till with the purchase of the cat bed, and brought home a kitten.

I love his gorgeous blue eyes, how much white he has, the 'eyeliner' by only one eye... and his brown tail! And being the Viking woman that I am, I wanted to find a name that would do his ice blue eyes justice while evoking a bit of that Scandinavian heritage. But it also had to be one or two syllables, roll of the tongue easily, and be different enough from the girls' names to avoid confusion. I used Google Translate for all kinds of words. Snowy, ice, icy, snowball, snowman, things like that. My brother even not so very helpfully suggested "snjotrodara" which, while not Icelandic (it is Latvian), does translate as "snowcat". However... not exactly trippin' off the tongue! So after much deliberation, I settled on "Frosti". Old Norse for frost. He doesn't answer to it yet, but he's only been here for a week, and he's got the attention span of a gnat at this point in his short little life.

The girls were at first rather taken aback, although Pips, while very growly, was also very curious. Lila did her growl-huff thing, where she starts a growl and then exhales sharply, so she sounds like a bloody dog. And while there are still occasional growls and hisses now, they are both playing with him a bit (to his great delight!) and there have been some baby baths happening as well. He did try to nuzzle Pips' belly while she was licking his head the other evening and that ended with him getting a sharp "not the mama!" hiss and a foot firmly planted on his side. He looked suitably chastised. I had a good laugh!

He is very entertaining, as kittens are wont to be, and spends nights and time when I am not home locked away in the spare bedroom. I don't need Lila getting even heftier chowing down on kitten food while he starves. He has food, water, a litter box, toys, and that new cat bed at his disposal. He has gained a quarter of a kilo in a week (he was a bit scrawny) and got lots of loving (and deworming) at the vet's today.

I think Frosti is a lovely addition to the family... and here he is! 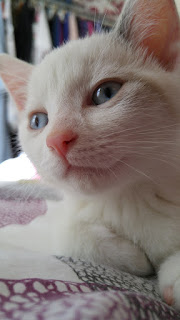 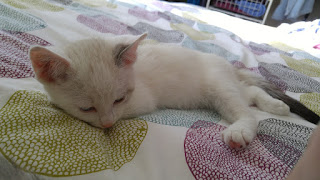 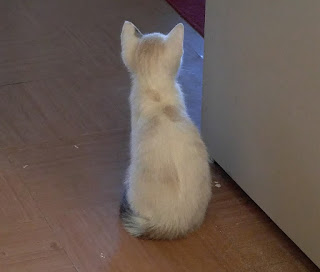 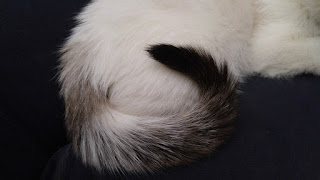 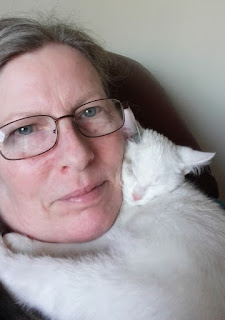 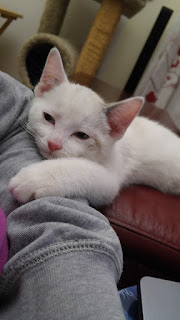