After the house sold, and I had the money in my bank account, I had gone and ordered a new sofa and ottoman from La-Z-Boy Furniture. I have a recliner made by them and it is well made and quite comfortable. For many months now, that recliner and a lawn chair have been the only seating in the house!

As of noon today, I now have proper furniture in my living room. La-Z-Boy had originally told me it could be six months before I got the couch, but late last week, I got a surprise call from them that the couch was ready to be delivered! Needless to say, I was very pleasantly surprised.

I can see on the label that these pieces were built in Tennessee. Apparently, there are only 5 factories that build the La-Z-Boy furniture, hence the long wait. I am just so excited that I can have more than one person over at a time!!

Maybe the cats will now sleep on the couch, instead of all over me. (I still prefer to sit in my recliner, because, well, it reclines!) Andi spent time having a bath on it and then a nap, and then another bath. Everyone else has been in their usual spots. Aska is on the cat tree in their room, Lila is on the window ledge, and Pips was on my chest for a bit and is now lying curled up between my lower legs. 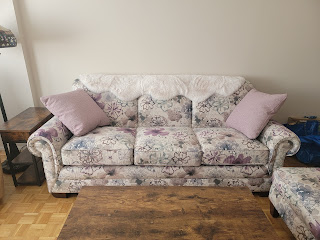 The "sheepskin" on the back protects it from Pips.
That is her favourite area of attack. 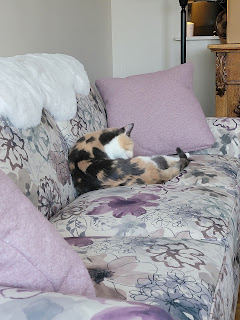 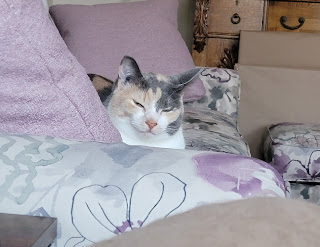 So the house saga has ended. The new owner took possession May 13th and shortly after that, the torrential rains started. I thank my lucky stars and whatever gods there are that I do not have to deal with a leaky basement ever again! It took just shy of 3 weeks to receive the funds, but that is normal.

So now I have paid off a bunch of debt, and ordered some new furniture (the sofa will hopefully be here by Christmas... it is being custom made, in the US, and I am hoping they can be a little quicker, but whatever... I am getting what I want). I have money in the bank, a new bed, and Lila got a haircut.

But the best news of all... I am retiring on Thursday! Yep, in 2 days. After 31 years of nursing, it is time to hang up my stethescope. I got into nursing in my 30s, so I have actually been in the workforce for 46 years and I am tired. My feet are sore and my knees are swollen. I just had my knees injected with steroids (arthtitis pain) and it hasn't quite kicked in yet. In August, I am going to have some of my blood extracted and spun down to get the platelet-rich plasma, that will then be injected into the right knee (to start ~ they only do one at a time) to hopefully encourage a bit of regrowth of healthy cartilage. Even if it is not overly successful, at least I will not be on my feet day in and day out anymore.

So yay to me! I am relieved to not have to go back to work next week, but a little apprehensive about leaving a profession that is faced with critical shortages of bodies. But I have paid my dues and it is time for others to stand up.

The house was on the market for one week. It sold for almost $28K above asking price. The buyer is the niece of a woman I work with. The possession date is March 13th.

Wow. No posts since January of 2021. I've been gone for a while! The past 14 months, I have been doing renovations on my house. My little crackerjack box of a house, that has been riddled with problems, causing me endless frustrations and added expenses.

Could I have hired someone to do all the work? Sure. But I would never have been able to afford to do that. Did I have the ability to do all the work? Yup. Along the way I had help from some of my family, especially my youngest sister. And a good friend who lives close by helped me whenever I needed him to. (His wife once quipped that all he ever did was come over to talk and bullshit, until he told her to come have a look. She was surprised at the transformation!) He's a millwright by trade, so a very handy and knowledgable guy to know! And I picked his brain a lot because there were a lot of complications with almost every step of this project.

I painted every room, including ceilings (I hate textured ceilings!!). I replaced the flooring in every room. I replaced all the cabinet hardware in the kitchen. I replaced the countertop, sink and faucet in the kitchen. I replaced all the light fixtures in the entire house, including the basement. In the bathroom, I had previously replaced the toilet, sink and vanity, replaced the tub surround, put in a large mirrored medicine cabinet, and replaced all the trim (including around the window) with vinyl trim. I had put shelving into the pantry and disassembled a bifold door, moving the hinges to the outside edges so it opened in the middle for the pantry door. I painted the wrought iron railing along the edge of the kitchen and down the basement stairs. The flooring that I put in the kitchen (snap together vinyl tiles) I also put on the back door landing and down the basement stairs, with vinyl stair nosing. The front door was replaced a couple of years ago. The high efficency furnace and central air conditioner are from 2016. The front porch is from last year. There was a lot more work than just that, because there were lots of repairs and modifications done along the way to be able to finish each step.

Just as things were winding up a couple of weeks ago, the hot water heater started leaking, so on a Sunday afternoon, my friend Glen installed a new one for me while I finished the stairs. And the next day, it started warming up here, and the inordinate amount of snow we got this winter (3rd highest amount in recorded history!) started melting while the ground was (and still is) still frozen. Of course it started coming in the basement!! When I discovered that, the words out of my mouth were "FUCKFUCKFUCKFUCK!!!!!"

It is not uncommon to get seepage of meltwater in basements here when the ground is still frozen. But because there was so much snow on the ground and the roof, I had water coming in in areas that had never seen water in the decade I'd been living in this house. I spent a lot of time sucking up water with the shopvac, running 3 fans and having the dehumidifier on 24/7. The furnace fan also runs 24/7 to keep the air circulating in the house. Glen has been a godsend, as he would come to the house to check the water status if I was working, and unable to come (I now live a 45 minute drive away). He would come over twice a day when it was a steady influx, and text or call with reports of how things were.

It is now mostly dry (one area, the usual suspect, is still a bit seepy) and I completed the final removal of tools and cleaning stuff today. I called the realtor and set up an appointment to list the house. I am sure it will sell very quickly, because there are not a lot of houses on the market in any price range, and this one is very affordable. I am hoping it will go for more than list price, but either way, I will do well, as my remaining mortgage is relatively low.

To not bore anyone with a bunch of photos, I did a walk-through video today. I didn't include the basement because it is mostly unfinished and not much to look at. But I am so relieved to be finished this massive project!!!