I'm still awash in a sea of boxes but at least they are all in my new home.

The move took 9 hours total. Two of us. My nephew's gout flared up and since he could barely walk, he was unable to help. Poor guy was so apologetic! A friend who had said he would help didn't show up and didn't let me know he wouldn't be coming.

I wasn't too impressed with that!

But it all went off without a hitch, there were no incidents of injury to person or damage to property and I am now free to unpack and arrange at my leisure.

The only things left to do are collect the cats and their paraphernalia today, clean the old apartment and collect my damage deposit. 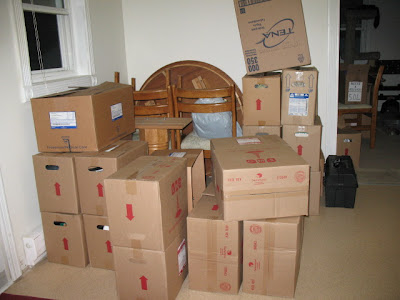 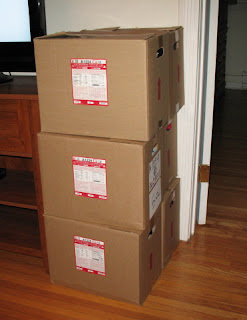 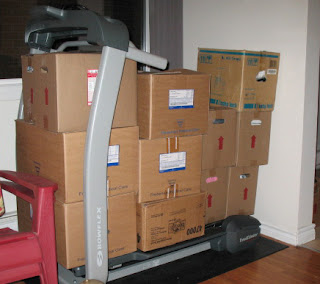 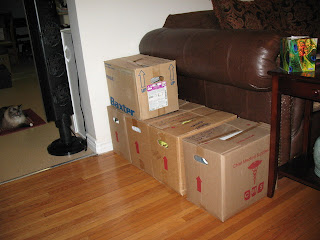 As moving day approaches, more and more things find themselves packed away into cardboard boxes.

So far, neither cat has been packed away, although Pips has tried many times by sitting inside half filled boxes. Lila is not interested in getting into a box, but seems determined to get what I put in out by digging around through the interlocked flaps once the box has been packed and stacked.

So far, she has not succeeded in hauling anything out. I would have to kill her if she did. Not literally, of course. But she would definitely get yelled at!

I take possession of my new house on Monday. I am trading vehicles with the MoS for most of that week so that I can fill his truck up with boxes and stuff and take it to the house each day after work. He will be stuck driving my little 4 banger around. But hey, it was his idea!

We will be taking my tv, computer and phone to the house Monday morning, as I have the guy coming in the afternoon to get everything hooked up and running. My 42" LCD tv won't fit in my little car, and I can't lift it by myself so he's agreed to give me a hand.

Plus I bought a set of speakers for the tv that will  give me amazing surround sound for movies and superb sound for music. Can't wait to get everything set up once I am all moved in!

Furniture moving day is Sunday, Aug. 26th. Once that day is done, it's a clean of the apartment and I am done with renting! I hope to never be in that situation again, or at least until they stick me in a home where I can trundle down the hallway in my wheelchair, making lewd comments to any young men who happen to work there!
Posted by Ponita in Real Life at 16:55 9 comments:

I'm sure most of you will remember the Man of Steel, whom I dated for seven months until he decided to end that relationship in January.

Well, despite the hurt that resulted from that, we have evolved into very good friends and socialize on a fairly regular basis.

And I'm okay with that. We get along so well and have fun together so why ditch a perfectly good friendship when the romantic part fell through? And it's all very good, in actual fact.

So, his one and only daughter got married on Friday in a province far to the west of here. He was unable to go for health reasons and, despite not liking the guy she was marrying (this is her second marriage), he wanted to be there for her.

Because he wasn't able to be with her, he decided to get drunk instead. He called me up at about 7:30 Friday evening, already half in the bag, and we chatted and I listened to him lament about his daughter's situation and how much he loved her.

But then he commented on his foot being swollen, beet red and really painful to walk on.

That set off my nursey alarms bells big time! I asked him a few more questions about it, but given his state of inebriation and the fact that he's a man, he poo-poo'd the seriousness of the state of his foot.

I told him I was coming out to assess his foot myself and if it looked like what I thought it was, I was dragging him to the local hospital ER whether he liked it or not.

Of course he didn't want me to come do that but I didn't listen to him. I jumped in my car and made a bee line for his place.

And just as I suspected, he had a pretty good cellulitis brewing in his foot and the back of his lower leg. So I bundled him into his truck (easier to get into that than my weeny little car) and we took the 5 minute drive to the local hospital. 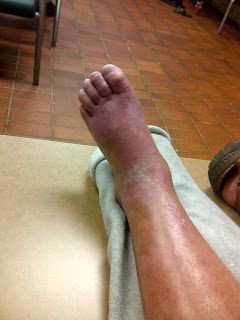 (taken in the waiting room in the ER)

Of course, we waited like everyone else, chitchatted with some of the other folks waiting, and watched as a couple of ambulances brought people in for various things. The MoS started saying we needed to order pizza and beer to liven things up! He was bored. Can you blame him?

In the end, blood was draw, and an IV inserted and antibiotics administered. We were back at his place by 3:00 a.m. Saturday. I spent the weekend at his place, keeping his foot elevated on pillows, with a large gel-filled cold pack on it for the pain and swelling, and feeding him ibuprofen for the pain.

Each day, in the early evening, it was back to the hospital for his IV antibiotics. At least for those visits, it was a minimal wait as he just had to see the nurse and was then back home in no time. By Sunday, his foot had improved significantly. The redness had diminished and the swelling was greatly reduced. He was walking better, although it still hurt to put pressure on his toes. Time for me to head home as he could get around pretty well by then.

He did thank me over and over, once he was sobered up, for coming out and looking after him. Despite his protestations (it's a sore foot! so what!?!), he did actually understand the seriousness when I explained the damage cellulitis could do if left untreated.

And I was pretty sure he didn't want to become a one-legged Man of Steel!
Posted by Ponita in Real Life at 10:40 13 comments: