As you know, I have ventured into the world of online dating again after the demise of my year long relationship with Maart. I was not a willing participant in that demise, but have nonetheless come to accept it for what it is. Which is over.

It takes two to tango, as they say.

So I have registered with a couple of dating sites and have been trolling the depths in search of someone to become my companion, my friend, my partner in adventure, my inamorato. So far, I've had no luck although I will admit to not really searching very hard. The websites fling potential matches in my face but so few even meet my 'requirements' that it is frustrating beyond measure. I am 5'9". Please do not direct me to men who are 5'4". I am not comfortable with towering over my date, thanks. And nix the smokers too, buddy. Absolutely a deal killer right there!!! And how is one a 'social smoker'? Does that mean you have the occasional cigar or one or two joints a day??? Does only smoking when you are outside your house count as social smoking??? Smoking is smoking... you either do or you don't. Period. Doing is a Very Bad Thing in my books. It's what killed both my parents, and I see its devastating effects in my work as a nurse all the time. So forget those guys.

The thing that ticks me off is these sites don't seem to pay much attention to the parameters I've entered for searches of potential dates. I won't say mates, because you have to have a number of dates before the mates part might become apparent. I don't really care about your level of income, or education, religion or even if you have kids living at home. I want to see pictures and I want a nonsmoker who is at least as tall as myself. I don't think that's unreasonable, but they seem to think I am too picky.

So, since this online searching for a man seemed to be so futile, I switched my sights to dogs. Yes, it's been a few years since I had to rehome Zoë the drool monster after I tore up my shoulder and sold my house. She has since passed away from cancer, at the age of 10 1/2, but her second home was an excellent one and she got tons of love and topnotch medical care (one of her new owners was a vet).

I hunted high and low for a dog from the local rescues that would be not too old, not too damaged psychologically and not aggressive with cats. I finally found one. He has pretty much no training whatsoever, but he's a smart cookie and is catching on fast. He's keeping me busy and I have been logging lots of mileage in our daily walks. Which is good. Gets me out of the house. Gives me something to do, and he is a bit more interactive than the cats.

Meet Sorley. He is a terrier mix, approximately one year old and had been in foster care since the age of about 3 months. He comes from one of the northern communities and was rescued last fall after being found as a stray (at 3 months! can you imagine! he would have starved to death). I named him Sorley because it is an old Scottish name meaning 'summer traveller' in reference to the Vikings who used to raid only in the summertime, as opposed to the raiders who came to pillage year round. (He came to me in the summer, and I am a Viking... makes sense, right?!?) 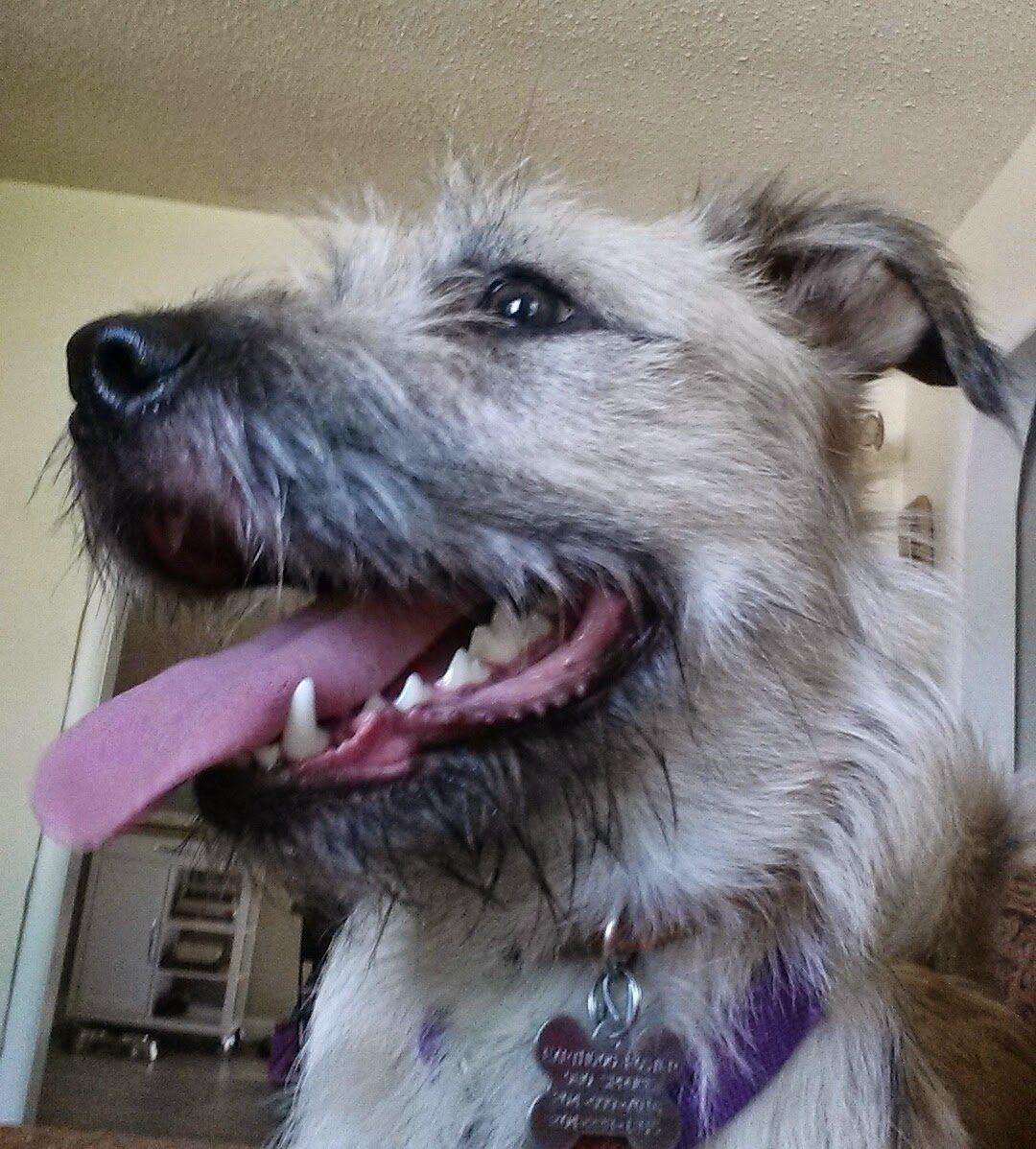 He's a bit of a barker, so we are working on that (his foster home did no training whatsoever but he lived with cats and dogs there so that's a good thing). He also, in typical terrier fashion, is a jumper, a climber and a digger. I've not left him in my yard to find out what trouble he could get into on his own. Lila lived in the basement for a few days before deciding that was just a little too cloistered even for her. Sorley is not much taller than the cats (but he does weigh in at 30 lbs ~ he's vertically challenged) and has been fine with them. He has tried to play a couple of time but so far, they are having none of it. I think Lila may come around to that in the future, but not Pips. She doesn't play with dogs. She likes them and will snuggle with them, but playing.... no. She was mauled (in play) as a youngster and didn't do well with that ~ which is how I came to have her. 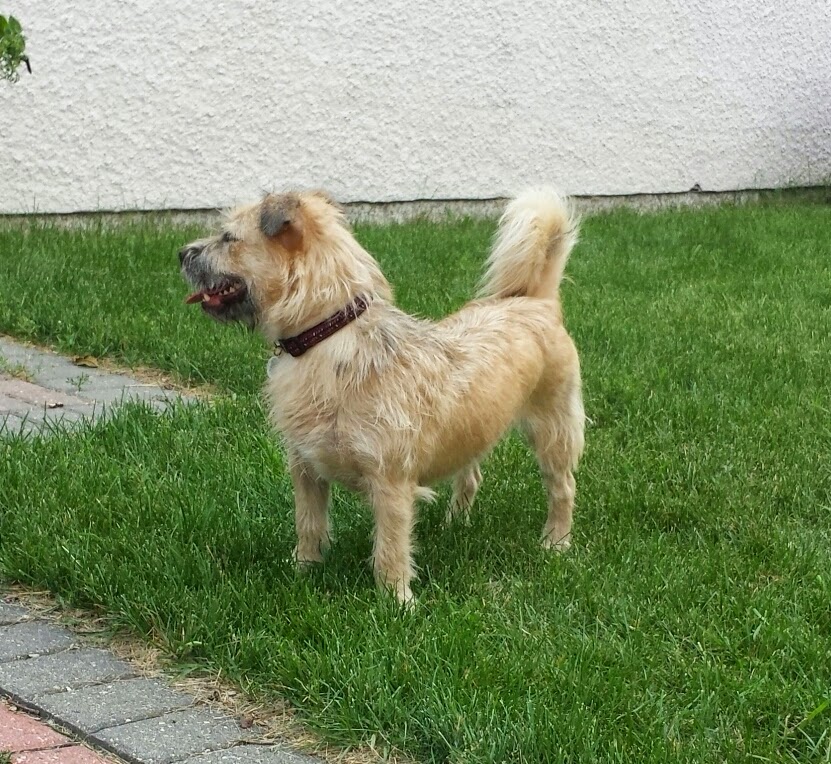 So now Sorley is the man in my life. We have twice daily walk dates, and snuggle on the couch watching tv. He's met his cousins at my sister's and they all played really well together. He was not at all perturbed by their larger size and exuberance. He is, after all, a terrier. Exuberance is their first name!!!

If a hu-man comes into my life in the future, you'll be the first to hear.
Posted by Ponita in Real Life at 09:42 10 comments:

Okay, so I lied

...when I said I wouldn't do the online dating thing again. But in all reality, barring someone setting me up with a brother or friend, I'm not really going places to meet someone new. So online it is.

I've only been on two sites for a few days and lo and behold, yesterday, on both sites, guess who came up as a match in their list of automated potential mates? Yes... Maart. Talk about a feeling of deja vu, as just over a year ago, we'd run across each other on one of these same sites. Oh well. Good luck fishing, buddy. It's a murky pond out there, filled with sharks, bottom feeders, a bunch of hapless guppies and the occasional fantastic sailfish.

I met with one of those guppies this morning. We had messaged back and forth yesterday a number of times, and although I didn't get a good 'feel' of what he's like (some people just aren't good at typing and computer stuff) and his one photo was in winter and kind of far away to really see what he looked like, I agreed to meet him at a local eatery for a 10:00 breakfast.

There were a few people milling about in front when I was walking up, with only one just standing there. Already I knew this probably wouldn't go anywhere. Change the socks to grey (and push them down to scrunched at the ankles), the shoes to beat up runners and the shirt to a light blue checked button down, but he was dressed pretty much like this. 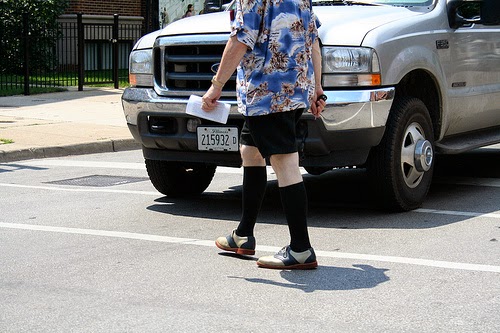 With a very large round belly. Now I am not slim. But at least I dress to camouflage my size when I can. And seeing as how you probably want to make a good first impression, dressing nicely is high on the list of things I do for a meet and greet. Casual but nice.

But whatever. We introduced ourselves and went inside. Chit chatted over a mediocre meal ( tasteless but huge 'wild' blueberry pancakes and partially burned, partially undercooked bacon [I asked for extra crispy... not extra carbon]) and as the hour went on, the conversation petered out. He wanted to spend the rest of the day with me, but no... I have a family thing tonight and another tomorrow, and I have to concoct some rocky road (gluten free) to take for the bbq tomorrow. Plus I have some shopping to do and no, you can't drive me wherever I need to go!!! GAH!!!

I get it. He's lonely. Don't think for an instant that I'm not. But I can deal with it. I spent more time alone over the past 7 years than with someone. You get used to it. This guy is bordering on desperate! No, not bordering. He's there.

Well, I am not. The hunt goes on, halfheartedly, but it goes on. Anyone got a brother or a friend who's available? With some fashion sense...
Posted by Ponita in Real Life at 12:43 8 comments: