My beloved Zoë is now 5 1/2 years old.... she is starting to get grey hairs on her chin. She is content to sleep most of the day away. And I have noticed she leaves things lying around. 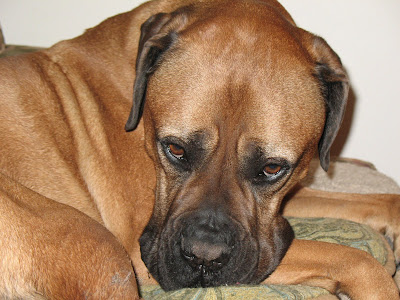 Bum crumbs.
Tiny little nuggets of poo, dried to little raisins, lying on her bed after she has vacated it upon waking from a sleep. The first few times I found these little treasures, they were on the living room carpet, right in the middle of the room. At first I thought my old cat, BB, was having litter box issues again. 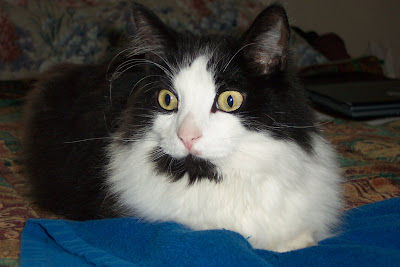 BB is Manx cat. He is a Stumpy. Manx come in three varieties: Rumpies, Stumpies and Longtails. BB's mum was a Longtail, meaning she looked like any ordinary cat. His dad was a Rumpy (no tail whatsoever). His grandmother (on his mum's side) was a Stumpy. BB has a tail.... just a rather abbreviated and misshapen thing. If you take your little finger and curl it a bit so it looks like a hook, that is what his tail is like. It consists of four vertebrae and the hook curves down towards his bum. So for years... like ten.... he would have issues occasionally with a bit of poo getting stuck under that little hook of a tail. It would freak him out and he would race around the house until it fell off somewhere. If the darn thing wouldn't let go, I would have to come to the rescue when I noticed it, and get a kleenex and pull it off (he has long hair). For some reason the past few years (he's now 14 1/2) this has not been a problem, but as cats get old(er), you never know what kind of issues they are going to have.
But then I started finding the bum crumbs on Zoë's bed too, and I know for a fact that BB will not go on the dog's bed. He (for whatever reason) doesn't like even walking over it. He's a cat.... and he's old... you try and figure it out.
So then, watching where the dog slept in the afternoons.... I figured it out. She loves to snooze in the afternoon sun that streams in the living room window, where it is warm and cozy. Hence the discovery of bum crumbs in that locale.
So far, these things have been tiny nuggets and have all been dry. I sure hope they don't get any larger or messier.... or she will have to start wearing panties when I am not home. 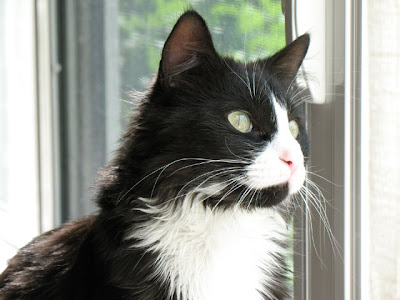 Pips has other issues. She has gas. There is nothing... and I repeat NOTHING... more deadly than cat flatulence. There is absolutely no warning. At least the dog toots audibly most of the time when she farts, so you know it is going to stink in 3.. 2... 1... now. But those pussy farts will knock over an elephant in an instant. I think the FBI could bottle those things and use them as a secret weapon to subdue enemies at a very low cost.
And of course, her favourite time to let one pfffft, is just after she settles down on my lap for a snuggle. The first time she did this, I looked around for the dog. Zoë happened to be in another room... and I know I didn't fart.... so there could only be one culprit. Good gawd! I had to get up and leave the room in a hurry! It actually made my eyes water! GAK!
This little cat is only two. She just turned two at the beginning of this month. How many years will I have to put up with pussy farts? At least I know the bum crumbs have a time limit. Bullmastiffs have an average lifespan of 8 - 10 years, so the dog is a bit past the halfway mark, but the cat.... Well, I have known cats to live to over 20. I have had two live to 18, and it looks like BB is well on his way to that marker, being over 14 and going strong. So I could have a couple of decades of pussy farts but only a couple of years of bum crumbs.
I think I will have to invest in a gas mask.....
Posted by Ponita in Real Life at 23:15