Breakfast on the Run

The other morning, all the animals gathered at the living room window, with intensity and anticipation. 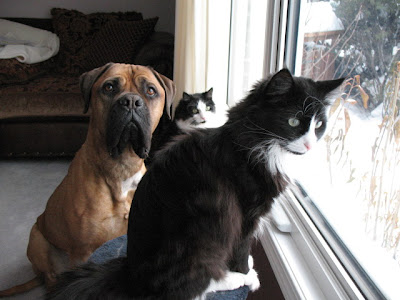 Okay... the cats were intense... the dog was anticipating something but didn't know what. She's not the brightest creature around. Lovable yes; smart... well, not always. She's not stupid but just doesn't always catch on.

So I wandered over to see what was so interesting.

Right outside the window was the resident bunny, chowing down on the branches of bushes I neglected to prune back in the fall. Perhaps my laziness in gardening has become a bounty for this bunny. Anyway, it is doing the pruning for me and staying alive in the meantime. 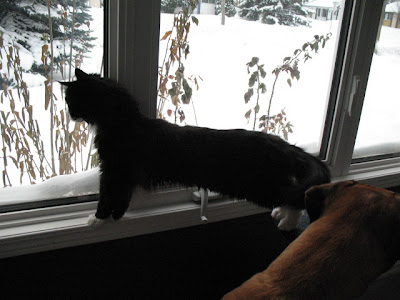 BB had to be content with standing up on his hind legs to peer out the window on occasion, as Pips had the best seat in the house on the kitty condo platform. Actually, BB hates going on that thing (why, I do not know) so really, it belongs to Pips. 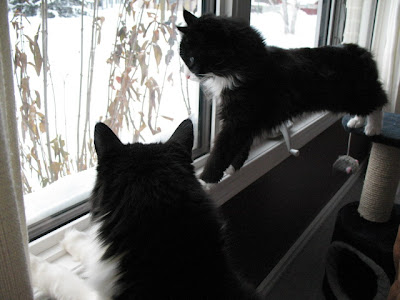 Zoë sat in front of the window, gazing about, obviously wondering what had the cats all atwitter. 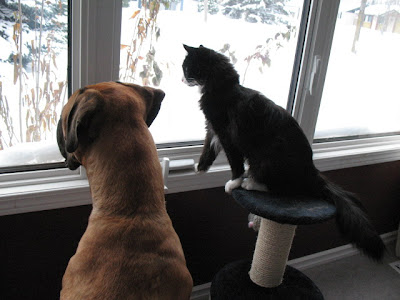 Now, Zoë knows what the word 'bunny' means. When we lived on the farm, there was a rabbit who lived there as well, who would taunt her into chasing it. Usually when you come across a rabbit in the open, it will hunker down, flattening its ear along its back to disguise its profile. This one would deliberately stand up on its hind legs, ears straight up, looking at the dog, as if to say 'come and get me, you big galoot!'

Over time, the dog picked up on the word bunny - we would spot the silly rabbit standing up, I would say 'go get the bunny!' and off she would charge.

Zoë weighs in at about 100 lbs. She is very muscular and powerful, but agile? Not so much. Certainly game to give this bunny a run for its money, as every time she saw it, she would bolt after it.

Often the bunny would wait for her to get fairly close (say about 30' away) before zipping off straight ahead. Just when Zoë thought she was closing in, the rabbit would exit stage left (or right, as the case may be) and disappear into the bush.

Only once did the dog make the mistake of trying to turn while going full tilt. It was not a pretty sight.... at all. Thankfully, she didn't tear or dislocate anything as she tumbled ass over tea kettle through the grass! The last thing I needed was another huge vet bill.

So, now, when the local bunny visits the front yard diner, if I say 'where's the bunny?', she is up and looking intently everywhere except down. She hasn't quite figured out that she has to basically put her forehead on the glass and look straight down to see the rabbit. I've tried to show her.... Pips demonstrates that maneuver quite well... but Zoë is a little slow on the uptake.

BB prefers it when I stand in front of the window and hold him, so he has a bird's eye view of the bunny.

Pips, who has been a hunter outside in her past life and probably tasted baby bunny from the menu, has bonked her head on the window on many occasions in her attempts to pounce on that hopping hors d'oeurve.

The only thing BB has ever killed in his life has been moths. And only if they are unfortunate enough to fly into the house.

Of course, I neglected to save the photos I took of the rabbit....