Much too short a time

It is with a very heavy and broken heart that I tell you my sweet little Tanner, the newest addition to my kitty cavalcade, was put to sleep today after a brief but very intense battle with cancer. He was a mere 11 months old. 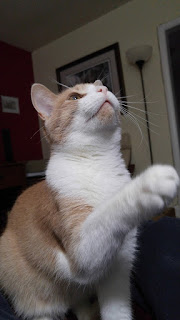 Tanner came from a no kill shelter and I brought him home the end of May 2016. I had been sitting on the bench in their kitten room, being assaulted from all sides by tiny furry fiends flinging themselves joyfully willy nilly with nary a thought to safety. They climbed and jumped and I stroked and petted as they wandered past. After a few minutes, this little orange and white kitten climbed onto my lap and plopped himself down. I started petting him; he started purring. He did jump off to play, and eat a snack, but came back several times to again plop down and purr. I figured that must be a good sign, and decided since he had obviously chosen me, I must adopt him. 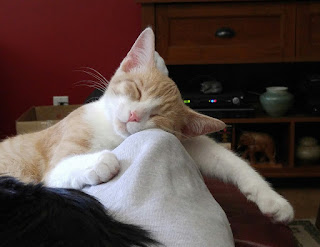 Tanner had been part of a litter of stray kittens. They has been found when quite new so they had a rough idea of how old they were. But the history of mum and dad was, of course, not know. Vaccination status of mum was probably nonexistent. This, unfortunately, is probably the reason for Tanner's untimely demise. All the kittens and cats that come into the shelter are tested for various viruses. Tanner was negative for everything and when old enough, started on his vaccination regimen.

My vet, after diagnosing Tanner with lymphoma, a type of cancer that causes rogue white blood cells (lymphocytes) to run amok through various parts of the body, told me that some cats can actually have a certain virus in their DNA, from infected cats breeding and giving birth before they themselves actually get sick. I guess Tanner came from that kind of a situation because although he again tested negative for the feline leukemia virus (which would be the cause of the lymphoma), if it was in his DNA, it would only show up in that test if he was actively shedding the virus. They could have done a more specialized (and expensive) test on his DNA but there was no point.

My poor wee kitty had lymphoma in his kidneys, liver and bone marrow. He became severely anemic and also jaundiced. I'd never seen a jaundiced cat before but he was glowing yellow. And it all happened very quickly.

On Dec. 22nd, he had some tummy issues and had diarrhea and was off his food a bit. So a trip to the vet for special food, medication and some probiotic powder and he seemed to get over that within a week. But his energy level never came back. He remained rather listless and was not playing much at all. But I figured it would just take a while for him to get back up to snuff as he'd been feeling pretty crappy.

Last week, he went off his food again, this time much more so than the first. And he was doing absolutely nothing. I could feel the weight dropping off and his shoulder blades felt sharper, his hips bonier. I tried various kinds of canned catfood and he half heartedly nibbled at them. By Saturday, it was bad. I called my vet when I got home from work and spoke with her. She advised me to pick up some Pepcid AC from the pharmacy and give him 1/2 a tablet twice a day to help settle his stomach. She said to even try meat baby food, as sometimes cats find that appealing, and to call her Monday with an update. 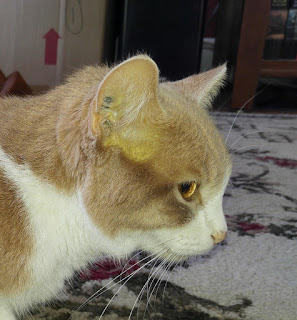 Monday came and I gave him his pill in the morning, tried to get him to eat, and went off to work. I spoke to the vet during the day and she recommended I try 1/4 of a Gravol tablet, for nausea. When I came home in the evening, picked him up to give him another pill and noticed the jaundice. It had not been there in the morning. Plus I could feel a lump in his side. So I called the vet and took him in Tuesday morning. They did blood work, an abdominal ultrasound, and a biopsy of his kidney. Everything pointed to large cell lymphoma (there is small cell also, which is more responsive to treatment). Needless to say, I was devastated, and the vet was quite surprised as this is usually an older cat's disease.

They kept him overnight and started him on steroids and chemo (which is a once a week IV injection), hoping this would shrink all those giant cells down. They gave me anti-nausea medication and several kinds of canned food. I struggled to entice him to eat anything so the following day (Thursday), the vet called in a script for an appetite stimulant to my pharmacy. It didn't help. Nothing helped.

Both Wednesday and Thursday nights I kept Tanner in my bedroom, with several kinds of food, water and a litter box so that the girls wouldn't be trying to eat all his canned food. Wednesday night he ate a tiny bit... a few licks here and there of the wet, didn't touch the dry. Lapped up a bit of the water from canned tuna. Throughout all this, he kept drinking water and so was not dehydrated. Thursday night was awful. He couldn't sleep, he wasn't able to find a comfortable position to lie in, he wanted out of the bedroom and then back in (how cat of him) and of course, I didn't sleep much either.

Because of the anemia, he got very short of breath with any exertion so any walking around he did, he'd be puffing away. He seemed to like lying on the bathroom mat. But I knew he was starving, and in pain and just never going to recover, so first thing this morning, I called the vet's office to make that final appointment. She was in surgery all morning so our time was 2:20 p.m. It was an interminable morning. I'd wakened at 6:30 a.m. and so had lots of time to spend with him, lying on the bed, or sitting on the toilet (lid down) keeping him company, stroking him and talking to him. Pips and Lila also spent some time with us in the bathroom, keeping vigil. He had a pitiful little raspy meow by this time but his purr worked just fine, and whenever I'd pet him, he would purr.

My vet is a wonderfully compassionate woman whom I have been seeing for almost 14 years. She is so kind and gentle and truly loves what she does, even this difficult task. She stroked his cheeks and gave him a sedative injection. There was a lovely thick soft blanket on the exam table and I lay him carefully on his side so he would be looking at me as I sat next to the table. He settled very quickly but she gave us about 10 minutes to make sure the sedative was effective. He was very comfortable and never felt the second injection. She and I talked about various pets we'd had in the past, as we let him slip away. I knew the names of some of hers and she had cared for various of mine. She cried along with me, as she listened to his chest and heard no further beating of his tiny heart. We spoke of how unfair it is that there are some awful people in this world who keep on going and yet this little cat, this young life, was taken so so soon. I spent some time alone with him afterwards, and said more tearful goodbyes. He is being cremated and his ashes will join those of my previous cats and dogs who have been precious parts of my life.

I so miss his cheery, chirpy, silly little cat face. He was such a lovely sweet soul. 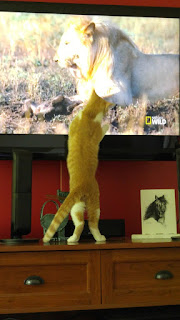 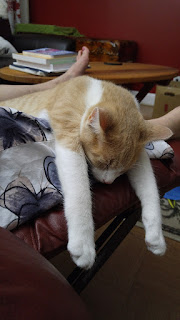 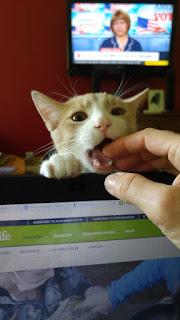 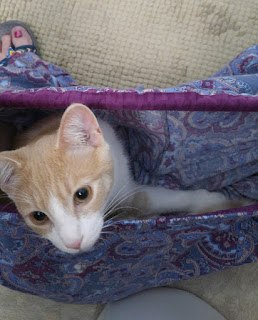 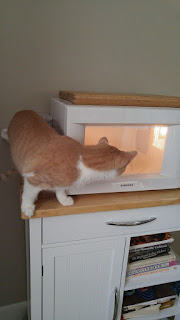 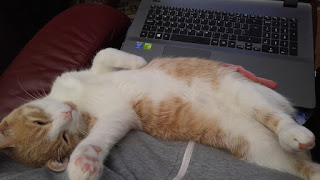 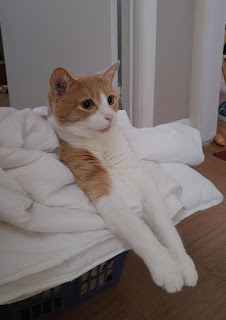