I've added to the little herd of felines in my house. This is Tanner: 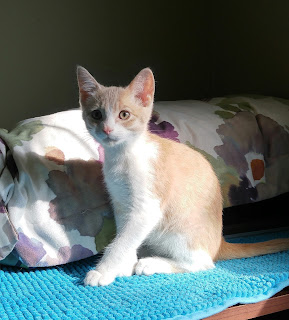 I picked him up from a local animal shelter at the end of May. At that time he was 3 1/2 months old. He is now approaching 5 months and has almost doubled his weight. He's really a cute little guy who is full of beans most of the time but when it is time to have a nap, he loves to come snuggle on me. Even when he is playing he often does "drive-by" face rubs: he will run up onto me, quickly rub his face on mine, and then dash off to play more.

Of course, I have lots of photos. And if he were human, I'd have ammo for those photos shown at your kid's wedding that everyone gets to laugh at. 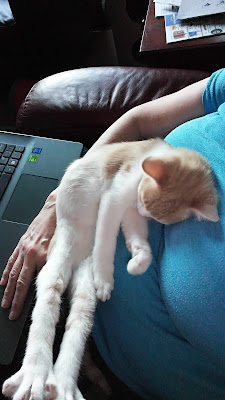 No, he does not have deformed legs! He'd been sleeping and stirred as I reached for my phone so when I snapped the photo, he was stretching those skinny little legs out. Plus he'd just had a big meal, so that fat little belly is full of kitten kibbles. 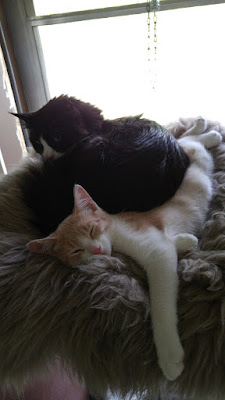 Pips warmed up pretty quickly as you can see here, which is a week after he moved in. She thought nothing of squashing him as he napped as he was taking up her space on the top of the cat tree. She is the queen of the household after all (and I am just the staff). 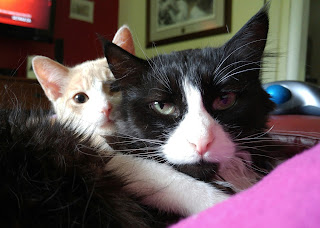 She plays with him quite a bit and they go careening around the house, chasing each other. She will put him in his place if he gets too rough or wants to wrestle when she doesn't. So there will be hissing and smacks on his head. This morning, she pinned him to the bed with his head under her chest while she chomped on his back legs... he had pissed her off. His response? "Bring it on, old lady!!!"

Lila has started to warm up a bit too. She lived in the basement for the first few days he was here (and he was confined to the spare bedroom), silly chickenshit girl that she is. But now they kinda play but if he tackles her (which he does, of course), she will hiss and jump up, whack him on the head and run away. Guess who gives chase? 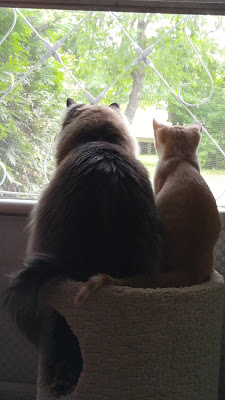 But if neither of the girls wants to play, he is quite willing to keep himself occupied by flinging small toys and bits of cardboard rolls around. No matter how much you spend on toys, they always seem to like the bits of paper the best. When I am working in the kitchen, he has to bring his toy of the minute to my feet so he can chase it around me. To avoid puncture by claw, I will pick it up and fling it elsewhere. I think he is training me...

And one final pose, just for the laugh value! 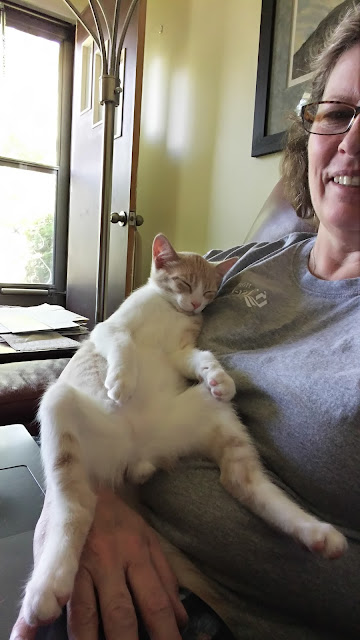