I haven't blogged since February.

I have been wandering around, though, reading and commenting here and there. Just haven't gotten my act together to throw something up here. Been working overtime, and picking up extra shifts (the first for my bank account, the second goes towards my retirement hours) so have spent a bit less time at home in front of this laptop.

Plus... I replaced the sink and vanity in my bathroom. I figured it wouldn't be TOO much of a hassle. This is what it looked like before: 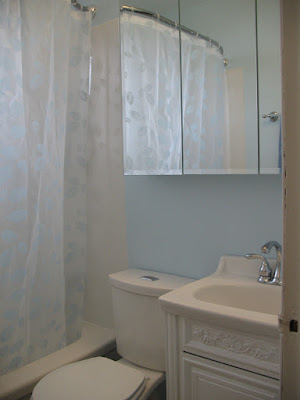 (which is AFTER the original 2012 reno to make it usable!) 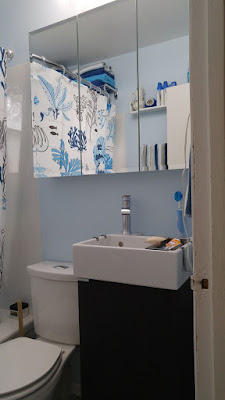 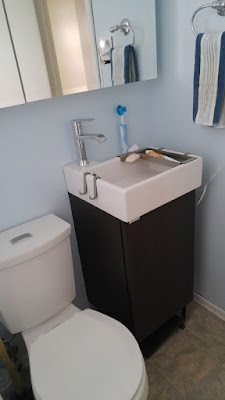 Of course, all did not go as I thought it would. That old sink has a drain pipe. And the idiot who put it in (the pipe, that is)... (this is not the 'original" one that was put in when the house was built) decided to take a major short cut and just poke a hole in the heat duct to run it down into the basement. This resulted in a cascade of things that had to be done, because the original cast iron pipe, that is still in the wall, turned out to be so full of rust that it was about 90% occluded and totally useless!

So on the 'bottom' end of things (meaning in the basement); this is what had to be done (after yanking out that ugly sink and vanity first):

1. cut the ABS pipe below where it exited the heat duct in the basement.
2. pull the heat duct off and cut it down smaller (that galvanized steel from 60+ years ago is seriously tough stuff!) so that there was space beside it for a new drain pipe.
3. put the newly reformed duct back on ~ no mean feat because one of the screws (on top) meant using a baby screwdriver that is only about 3" long in a space between the top of the duct and the floorboards.
4. dry fit the new drain pipe and mark exactly where it had to line up to get the two angles correct  (45º up and to the right but also slightly to the back as well) and then cement all the joints (and leave to cure for 24 hours)
5. repair the hot water line where it T's off the main line because the soldering was all corroded and the shut off valve would not turn

Then the upstairs stuff, in the bathroom. The new sink, as you can see, has a lovely single lever faucet. That I bought about a year ago because it was exactly what I wanted and happened to be on sale at the time. I mean, really on sale! Like 40% off. Couldn't pass that up. Well... it is 7" tall. And the new sink and vanity stand 36" tall. (Look back at the before and after photos. Look at the sink height compared to the toilet in each. Yeah, that.) The old one was 31". And see that medicine cabinet on the wall? It was too low for the new sink and faucet height. Which meant this had to happen before the new sink/vanity combo could go in:

1. remove the cabinet from the wall.
2. remove the light fixture (I know you can't see it in either photo, but it was lower and to the right side in the first photo ~ although I had replaced the light during the 2012 reno, I had not centred it on the wall)
3. measure the sink/vanity/faucet combo to determine new placement for the cabinet and the light
4. do a drywall patch over the hole in the wall from the very original built in cabinet from way back when, that I hadn't bothered with in 2012 because the new bigger one covered it ~ and moving it up meant the hole now showed...
5. curse yourself for not remembering that new 1/2" drywall is not the same 1/2" as old 1/2" drywall... and spend a few days building up the area with drywall mud
6. cut a rectangle of drywall from the box of the current light location to the next wall stud to the left
7. move the box to that stud and up a few inches then secure box to said stud
8. run the wires back into the box
9. patch the wall by flipping the rectangle that was previously cut out ~ I did this on purpose, because I had to move the light both to the left and higher, so the hole was still in the right spot for the box by just doing a 180
10. do all the sanding, priming and painting required
11. put the new heat vent cover on the new duct, which is now down at baseboard level, rather than stuck in the wall where the vanity sits
12. replace the shut off valves on the sink water lines with those nifty shark bite ones that just push on. the hot water one was pretty straight forward... (with water main turned off) use pipe cutter to slice off corroded and rusty valve... push new valve into place and voila! there you go... attempt to do same with cold and find that the curvature of the pipe as it comes through the stud from the basement has caused the pipe to be oval and not round, which means the shark bite thingy won't seal... so this requires the purchase of a couple of shark bite elbows and some PEX tubing... a trip to the basement, the slicing off of the cold water copper pipe off the main line, sticking on one elbow to the tubing and then to the copper, running it up next to the hot water line, sticking the other elbow on, another short length of tubing, and then the shark bite shut off valve... secure to stud with a piece of metal strapping
13. put the anchors in the drywall for the screws that will hold the cabinet on the wall... I measured numerous times to make sure this would be high enough for that faucet!
14. haul that 36" x 30" steel box up to the wall, standing on a step stool and try to find one anchor to get a screw into... and then proceed to lose my balance and take a tumble right into the tub... with that steel box over top of my head... landing with my knees on the mat in front of the tub and my hands in the bottom of the tub... and that steel box punches a corner into the acrylic tub surround... and the only injury I got was a skinned knuckle... yeah, I know... I got horseshoes!
15. go in the basement and find a strip of plywood 4' long and about 8" wide to use to support one end of said metal box. This actually worked like a charm, as the plywood was flexible enough to allow me to move the cabinet around while keeping it supported and preventing me from doing another header into the tub (and not have my horseshoes kick in) so it was installed without further incident
16. reinstall the light fixture in its new location
17. put the legs on the vanity, affix vanity to wall, plop sink on top of vanity and check for fit, then remove it, run a bead of silicone along the edges and replop the sink, then run a bead of silicone along it and the wall... and wait another 24 hours for the silicone to cure
18. install the faucet, and also the drain and trap under the sink.... and fiddle and adjust to work it around the shelves inside the vanity... thanking the reno gods that rubber connectors were invented to allow for joining pipes that don't quite line up straight
19. clean up all the mess... and
20. sit back with a sigh of relief that the whole project only took two weeks!

And here are some of the photos of all the stuff I had to do. 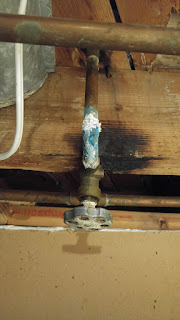 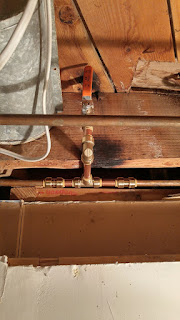 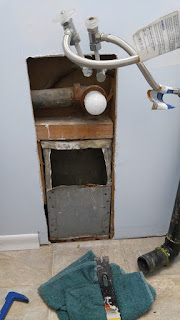 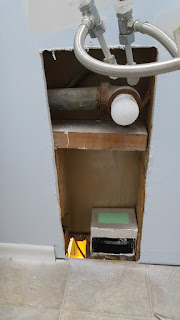 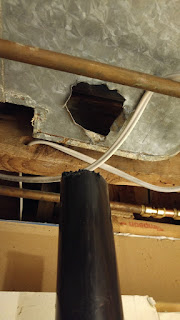 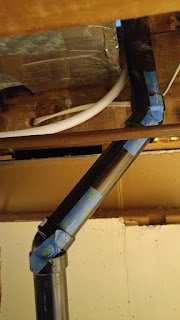 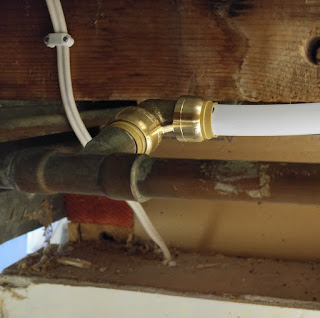 And of course, all work was professionally supervised by our favourite black and white cat! 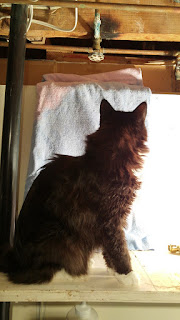 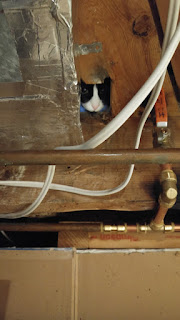