For the third year in a row, I am adopting a kitten. In 2016, it was the lovely young Tanner, who's life was cut tragically short by lymphoma at the age of 11 months. In 2017, Frosti made a 9 month appearance but turned into a total bully with Pips and Lila, although with humans, he was super! He went back to the Humane Society to find a single cat home.

In 2018, actually this past Sunday, I brought home a skinny little kitten I have named Aska. The name is Icelandic and it means 'ashes'. I chose that name for two reasons, really. One is her colour. She is a dilute calico, meaning she is white with grey and tan/buff. A regular calico is white with black and orange. She appears to have amber eyes but the final colour isn't set as of yet, as she is only 5-6 weeks old. The second is she was so close to dying, this is like she has literally risen out of the ashes to live again! 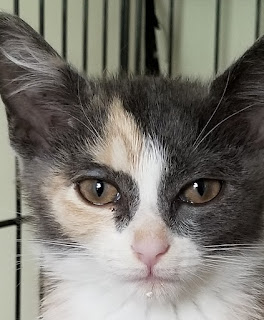 I know someone in the city who cares for a colony of feral cats. She traps the adults, gets them spayed or neutered, vaccinated and then returns them to their colony site, as they are wild and not tameable. She is doing her part (more than, actually) in trying to curb the feral cat problem in the city. (There are an estimated 100,000 feral cats in this city of 750,000 people.) Any kittens she can trap, if young enough, will be tamed, then adopted out, spayed, neutered, vaccinated, and dewormed. She feeds the colony and has insulated shelters for winter. Life as a feral cat is hard and usually much shorter than for house cats. She has a huge heart and works hard to do right by these cats.

A couple of weeks ago, a tiny kitten showed up in her back yard, where she has a feeding station for the strays in the area. She managed to trap it and take it in. It was a very young, very dehydrated and starving female kitten. My friend kept her for almost 2 weeks, feeding her with a dropper at first with kitten milk replacer and water, then feeding high quality mom and babycat food intended for lactating females and weaning kittens, and getting her strength up. She also took the kitten to the vet, where she was checked out as healthy but underweight, no fleas, no ear mites and blood tested for FIV (think HIV for cats ~ they can live a normal life even if positive) and FeLV (feline leukemia, which is a death sentence). The kitten was negative for both of those diseases.

I had donated $100 towards her vet bill (I follow her feral cat page on facebook and had been watching her posts on this little one) and told her if the kitten was negative for FIV and FeLV, I would adopt her. She would have to be negative for FIV, as Lila is allergic to vaccines and has not been vaccinated for anything since the age of two, where she had severe reactions even when premedicated with antihistamines and steroids, and she is now nine. So when the kitten got a clean bill of health last Friday, I made arrangements to go see her on Sunday. She weighed a mere 0.73 kg (1.6 lb)! You can feel her shoulder blades, spine and hip bones. She has no pudgy kitten belly, no rolly poly at all. She is so skinny! And she's actually put on weight in the past two weeks eating good food at my friend's place! 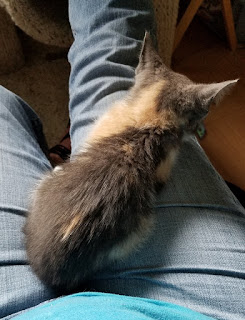 My friend is letting me use a large wheeled multilevel cage to keep the kitten in while she gets bigger, and the older cats have a chance to get accustomed to her presence. Both Pips and Lila have been growly and hissy, but Aska has been rather unperturbed by it all. She is affectionate and loves to be petted. She purrs like crazy and any touch gets her tail and bum up in the air. She is eating well, drinking water well, using the litter box with normal bodily functions, and is playing on the cat tree when I get her out of the cage and let her loose in the front room (with the door closed, of course). 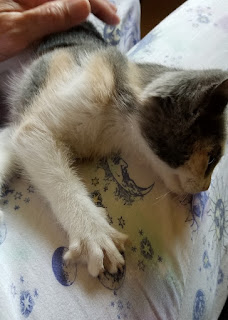 I have fostered kittens before who were younger (remember that litter of 5 from a few years ago? they were 4 weeks old when I got them) but never one this thin. I am hoping she starts building some muscle and putting on some weight now that she is getting out of the cage and climbing around on the cat tree. She is so very cute! 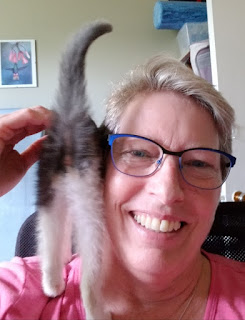