So much has happened in my life since I was last here. Real Life has been getting in the way of my online life. And that's a good thing, really.

The end of August, I adopted Teak, the rescue dog with the dodgy hip. He's a lovely soul but has the physical issues of hip dysplasia, which requires daily anti-inflammatory/pain meds, as well as behavioural because it has become apparent that he's not really been around other dogs. He's great with people, especially kids, but other dogs? Not so much. 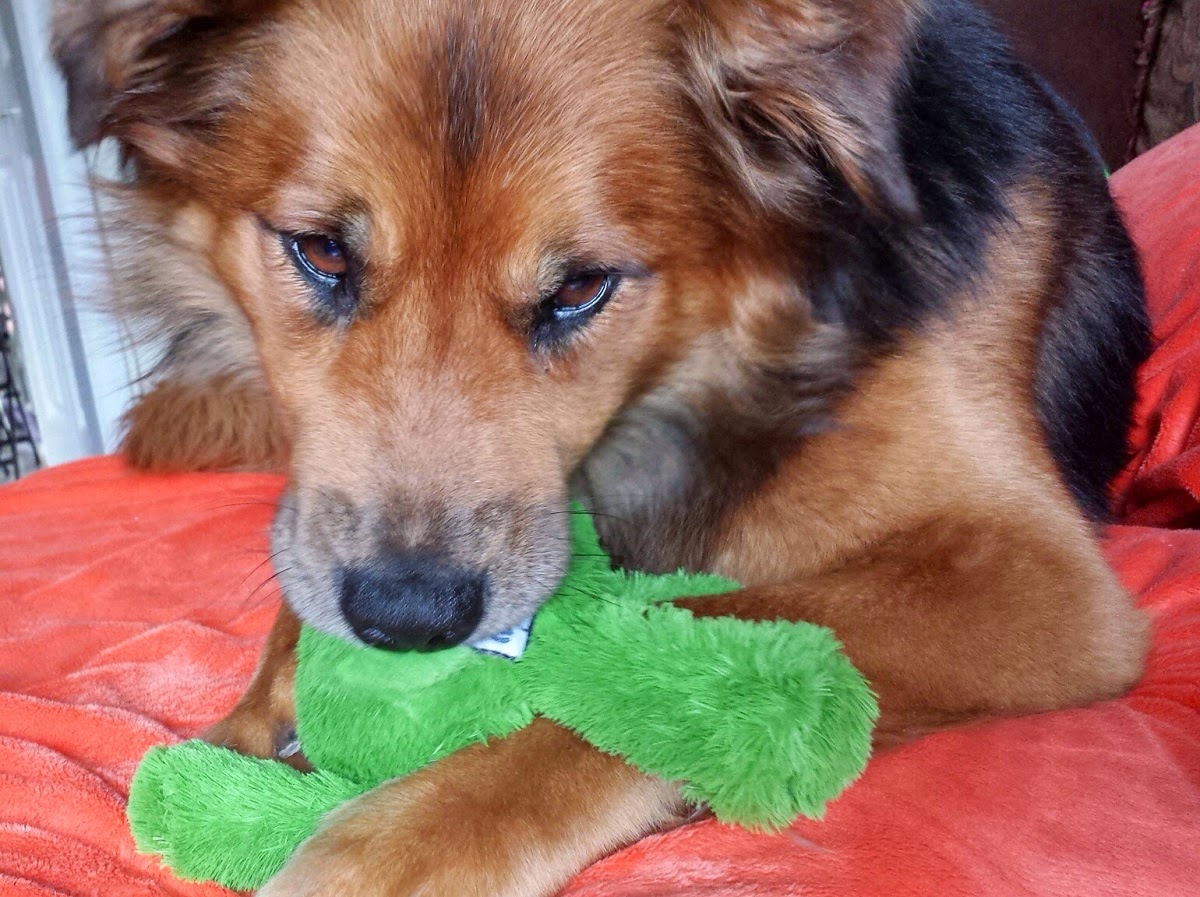 Because he needs a total hip replacement to be comfortable again, I have started a facebook page (https://www.facebook.com/pages/Teak-Needs-a-Hip/671688412930037?ref=hl), a twitter account (https://twitter.com/Teak1needsaHip) and a crowd funding campaign (http://www.gofundme.com/gqspyk) in an attempt to supplement my efforts to save the $5000+ needed for his surgery. If I get more than enough to cover his expenses, the rest will go to the rescue shelter's account at the animal hospital they use. The shelter has been excellent with me adopting Teak, giving him a huge soft dog bed, a bottle of the prescription meds for his hip (which costs about $120) and doing a straight trade on a large kennel (the one I had was too small). So here's hoping next summer will be spent rehabbing his hip. He really does deserve to be a happy healthy pup!! 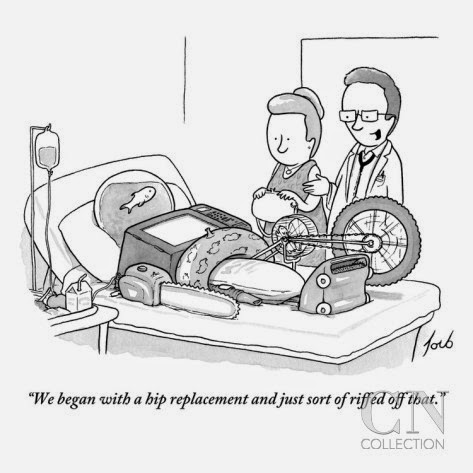 I've had a couple of mishaps while walking Teak. One, the beginning of October, involved a wayward bunny who just happened to pop out from a hedge right next to the dog and then take off back the way we just came. Teak, of course, gave chase (he is a rabbit obsessed dog, let me tell you!). His reaction time is a helluva lot quicker than mine so when he gave chase, I got yanked off my feet (as I was on the other end of the leash), spun around and then I hit the pavement on my right side. Elbow, hip and knee took the brunt of the wipeout and I ended up with a loose dog as well as road rash and bruises. Luckily the bunny went under the front porch of the closest house and Teak didn't fit, so he was easy to catch. We marched the 1 1/2 blocks back to my house with me cursing, limping and bleeding. My elbow and knee still hurt to the touch, so I am convinced I bruised the bones. Nothing broken and the joints were not affected. I had a nice purple hematoma on my hip for weeks too. A couple of weeks after that while walking down the street with Teak on leash, a woman opened her side door and came outside. Her puggle (beagle pug mix ~ max 20 lbs) came barrelling out the door with her, saw Teak, and charged him, barking and growling. Well, of course Teak got defensive. He was doing nothing other than strolling along when this little hellion announcing it's going to rip his face right off. So to prevent my dog (a little over 60 lbs) from killing this little monster, I have him by the harness, braced between my knees, yelling at the lady to come get her dog NOW if she wants it to stay alive!!! She doesn't... said something about it being friendly (she obviously knows nothing of dog to dog communication!), so it is up to me to pivot with Teak between my knees to prevent a massacre. Of course, I hurt myself doing this. I pulled my left gluteuls and piriformis muscles. For you lay people out there, I strained my bum. And it still hurts, weeks later, even after massages and physiotherapy... and a slip on the ice a couple of weeks ago that re-injured it. *sigh* I love my dog, but this is crazy! 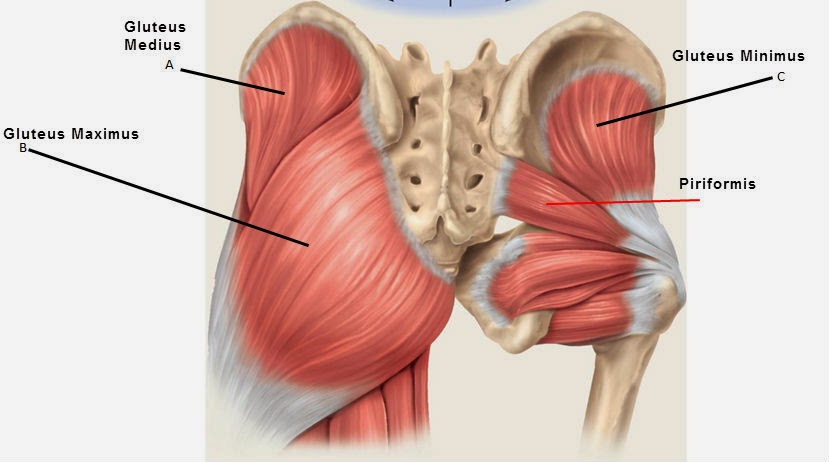 I had made my way back into the land of online dating during the summer while I was off recovering from the carpal tunnel surgery to my left hand. It was the usual frustrating journey... until I met the Old Fish (his online moniker). He's not old (being 3 years younger than me) nor is he a fish... he's an Aquarian like me. He's originally from the East Coast (Down Home, if you are from that area) but spent a number of years in the Army (medic ~ special ops, pathfinders, search and rescue, plus he did tours in Iraq) and settled in the Winnipeg area after his last posting here in Manitoba. He retired from the RCAF in the late 90s and has been here ever since. We met online, emailed back and forth for a few days and then met for a coffee one Sat. evening at a Starbucks. We shut that place down after a couple of hours, so moved across the parking lot to a pub. Well, we shut that place down too. So at 2:00 a.m. we decided maybe our "meet and greet" had turned into an actual first date and made plans to see each other again. And again, and again... And now we are virtually inseparable. Outside of working hours and commitments that are necessary, we are together, either at his place or mine. He has a dog and a cat, so the dogs go back and forth with us. It's been great. That's all I can say at this point. I don't want to jinx anything, if you know what I mean.

Work is busy as always. I have been picking up the occasional extra shift at my regular hospital, as well as sporadically at the local hospital here in my town. What I earn here locally is going into the fund for Teak's hip.

I am sorting through all the stuff I have stored in my basement this weekend so we can start gutting it. I need to get all the drywall and insulation out so we can have a good look at the structure. Old Fish thinks the centre of the house has dropped because the support posts are not doing their job. He discovered one in a closet in my laundry room down there that has actually been cut off (!!!???!!!) and is not holding up the beam at all. The others are wooden posts that were cut off and small jack posts inserted on top of them to connect with (and supposedly support) the main beam. We are thinking they are the main reason for the cracking in the walls upstairs (which has gotten lots worse since I moved in just over 2 years ago). What we find will determine if I call an engineer in to have a look at the structure. The crack I repaired last year has held well, with no leaking since. Metal jack posts are quite inexpensive (less than $100 each and I would probably need 4 - 5) so replacing those won't be a financial burden. The underpinning of the foundation quotes were in the ballpark of $25K. That's just way out of my league, and this house probably isn't worth it anyway. We will save the insulation (to be reused if it's in good shape [ie no mold or moisture damage]) and the 2x4s. All the drywall and wood panelling will be gone!!! The decor down there is so old late 80s, it is gross. So once everything is pulled down and the beam is properly supported, the rest of the work can be done when I can (a) find the time to do it and (b) afford it. And I can rearrange walls etc to suit my needs. :-)

Winter is here in full force and it has been colder than normal. At least we have a lot less snow than this time last year! I sooo don't want a repeat of that. Gak. But the house is warm and my truck runs like a charm. Teak now has the appropriate gear for winter as well. Despite having a nice coat, he still hops around with cold feet, so the boots are a must. The coat covers his hip and may help keep it warm. Besides, he rocks the red, don't you think??!! 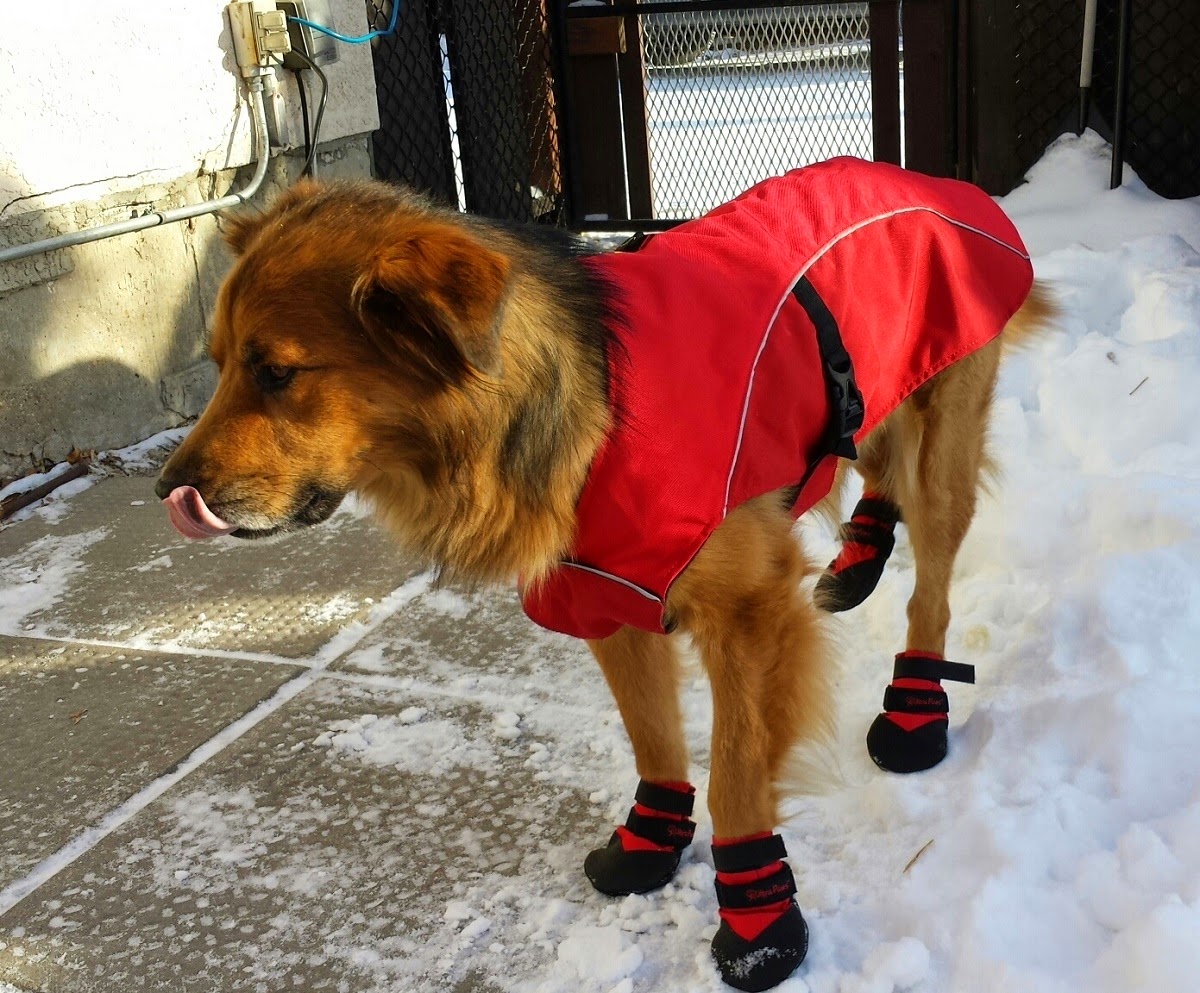 (you can see his right hind is up off the ground)

I am going to attempt cross country skiing again this year. Did it a bit several decades ago. Old Fish is into it in a big way so I will buy boots to fit his daughter's skis and take it from there. I just don't know my physical limitations these days, what with my old back injury, fibromyalgia and bad knees. But I need to do something! So this will be good. I hope, I really hope, it is something I can do, because I used to be so active and now I so am not. So if it goes well, I will buy my own skis and poles. This province has many many miles of ski trail. Might as well take advantage of them!

So there you have it. My life in a nutshell over the past few of months. I have a lot of catching up to do but have no idea when that will happen. I will try!!!
Posted by Ponita in Real Life at 16:48